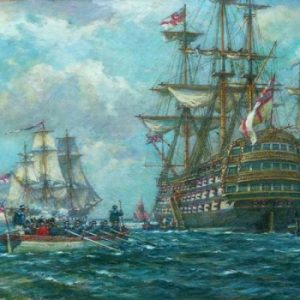 The Battle of Trafalgar

Trafalgar: the greatest sea battle of the age of sail and the event that sealed Britain’s domination of the seas for a century. The events of 21 October 1805 dominate the history books but the battle was not actually over. A campaign medal was also awarded to the crews of Captain Strachan’s fleet who fought a few days later. This may have been gilding the gingerbread but it eventually provided a major exhibit for the National Maritime Museum in Greenwich: the stern of one of the ships involved.

And we could not let the commemoration events of 2005 pass without a mention of Falmouth’s role in the battle: the secret arrival of Lt Laponetiere of HMS Pickle on 4 November during his race for glory at the Admiralty. Penzance and Falmouth dispute where the news of the battle first arrived. Read the two articles and you may find that both towns may be right. Falmouth may have been the first place Laponetiere landed but he kept silent. The first public first-hand news of the battle may well have landed at Penzance brought there by Strachan’s fleet. Judge for yourself.