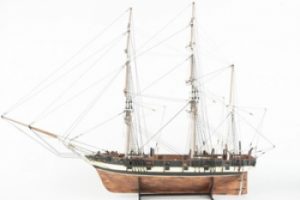 Between 1828 and 1835, a young James Williamson undertook seventeen successive voyages as a surgeon on board the packet Duke of York. On most of these he served under the command of Lieutenant Robert Snell, R.N., though in his special position as surgeon he was as near to a companion to the commander as is possible with the captain of a ship. James served towards the end of the sailing packet era and his voyages took him to all of the foreign ports of call visited by the Falmouth Packets – with the exception of Lisbon which was still the preserve of the ‘senior’ established packet commanders, when James joined the service. Over the next few years the Lisbon and Mediterranean routes were taken over by embryo steam-packets.

Over the years James worked on the following packet routes which entailed visits to:

James’s journals reveal so much about the communities he visited, their politics and religion – throughout his Calvinist Scots upbringing prevails. He has much to say about forgotten aspects of slavery, and observations on the music, dress, culture & character of the inhabitants of the many ports of call. In addition, his unique position on board allowed him time and opportunity to get to know the passengers, of whom he gave his candid observations at the close of each voyage. His observations on two parties of Cornish miners travelling to the Brazils are particularly revealing. He also touches on aspects of the bullion trade – the carriage of gold and silver on freight, and towards the end of his packet service he gives a unique insight into bullion smuggling.