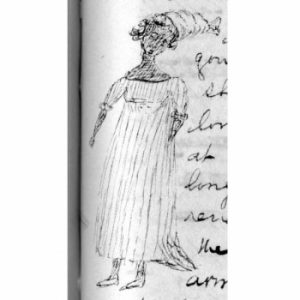 Tuesday 18th – yesterday at noon we were by our account 161 miles from Barbadoes and did not expect to make the land before daylight to day. But the wind coming to blow very fresh and as we found being considerably ahead of our reckoning, at 2.30 A.M. by the light of the Moon, the land was plainly descried, & we hove too for some hours. At daybreak we made all sail & at 9 A.M. we came to anchor in Carlisle Bay, when the Commander started [ashore] with the Mail. Weather squally with occasional showers of rain during the day.

Wednesday 19th – all is quiet here and in fact I noticed no difference from what I have always seen. I have now been here so often that I have left myself nothing par[ticular] to say. Weather rather squally with light rain. At 5 P.M. went to sea – wind very light & foul – but in a few hours it became fair, but we had very little of it all night.

Thursday 20th – fine weather. Wind light and favourable – saw S.t Lucie but could not succeed in reaching it to day. Weather squally with showers at night.

Friday 21st – this morning at 6, the commander left with the Mail and returned at 12. Nearly a calm while he was away. Very dull and very hot. Martinique seemed close at hand but being very high, it is really a good distance off. As soon as the Mail was on board, we made sail for S.t Pierre. Having very light airs we made very little way. At 2 P.M. a moderate fresh breeze sprung up but strange to say from the Westward – consequently foul for us. Fine weather. As night came on the wind became more & more foul, which prevented us from reaching S.t Pierre to night.

Saturday 22nd – got up at 6 this morning in order to accompany M.r Lamb (our passenger) and the captain on shore. I was particularly anxious to view S.t Pierre by day light and to compare the impression produced by moon light with that of day. You may remember I spoke very highly of it and wished for a better opportunity of seeing it.

We were a long way off, and from the great distance and from the Town being cast into the shade by the hills and mountains surrounding it, we could but very faintly make out its appearance. We soon however approached nearer, and at the same time the sun mounting high in the heavens, we plainly had unfolded to our sight its situation and aspect. It seemed to be built in a small curvature of the coast and in the line of buildings it followed that curvature. On either side and behind it, the country rose to a considerable height, the Town itself being close to the sea side. The hills on the left, as you enter, are pretty high and close to the Town, while those on the right are farther off and not so elevated. Behind and a little to the right of the Town they country id highly cultivated nearly to their summit. On viewing the Town with the naked eye and at some distance off, the whole presents but a so so appearance with its red roofed houses. Two buildings alone attract your attention by their size, the one near the beach & the other at the left extremity.

According to regulations, the Commanders of Packets are required to wait upon the Naval Officer in command of S.t Pierre, as a compliment to the French Government. Accordingly M.r James went on board the L’Astree the only vessel of war here and which was laying a short distance off the Town. This duty performed we pulled in for the shore, and passed on our way among a few merchantmen. We were at first in some doubt where to land, as all we saw was beach, beach, and not a single point of elective preference. Not a single wharf or jettee did we espy and at last we landed just opposite where we happened to be. Faugh, faugh, said I to myself as soon as I set foot on land. “What a horrible stench,” enough to knock you down as the saying is. Nor were [we] long at a loss to account for the perfume, which proceeded from nothing more or less than the filthy custom prevalent here of making the beach act the part of general Maison d’Aisance to the great offence of decency and [in] more senses than one. All along the beach, the houses looked mean & paltry & seemed to be inhabited by the lower classes who alone indeed could bear with indifference & impunity the evils of which I complain. As soon as the gig had been hauled well up on shore, we gladly went on our way with the Mail. We crossed one long & decent street, adjoining the beach ere we got to the main street, which was the one whose appearance last voyage, when seen by moonlight, had impressed me so favourably. Then all was still and silent, now all was life, bustle ands activity. It is without doubt a fine street and built solidly of stone. The street is rather narrow. The trottoir is rather small & the rest is paved with large rough stones. Thro’ the centre flows a stream of fresh water, rushing and gurgling in its passage. It is brought from the high ground above & must be a great blessing to the inhabitants, promoting comfort and cleanliness. Across the streets at reasonable intervals iron chains pass from house to house, having a large lantern suspended in the centre, by which the town is pretty well lighted. I have said the streets were crowded & so they were – more so than in the English Islands. There was an abundance of blacks, mulattoes, mustees with a sprinkling of whites.

They were all very decently dressed. The coloured ladies had their heads and shoulders bare. Their heads were decked, in their opinion, but I would say disfigured by a handkerchief rolled up and stuck on one side in a very jaunty manner. And worse than all they wore gowns of brightPatterns with very short waists and tremendously long bodies and some attempt at a train, that is to say, they were longer behind than before, which rendered it necessary to trice up the tail and carry it over their arm in the streets. To my eyes such a costume looked frightful sed de gustibus non dispectand.

Their legs were guiltless of stockings tho’ their feet were shod in very neat shoes. Such was the general dress of the coloured ladies. We met several white ladies, dressed in no ways different from those at home, with the exception of two or three in the shops, who appeared in loose ugly abominable wrappers. I suppose the excuse is they are so cool – if so this is the first time that I have heard of a French woman sacrificing appearance to comfort.

Amidst all these sights & objects we passed a long way up the main street, till we reached the Post Office, where we delivered our Mail, and while they were getting ready for us, we took a stroll by the West End, having entered by the East. The same appearances presented themselves – good houses & streets, same dresses & people. After half an hour we returned, received our Mail, and shortly after left the shore for the Old Duke, on board of which we arrived at 12 oClock. No time was lost in making sail for Dominque, which is about 40 miles distant – but owing to light, foul, and baffling winds, we had only reached as far as the nearest extremity of the island by night. Fine weather.