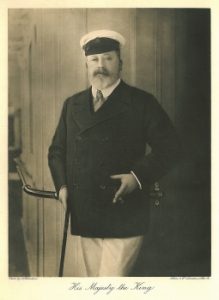 British Yachts and Yachtsmen was published in 1907. Written by an anonymous author for The Yachtsman magazine, it is sub-titled: ‘A complete history of British yachting from the middle of the sixteenth century to the present day’.

The book asserts that the second half of the 17th century and restoration of Charles II was the start of yachting in Britain, calling it a ‘Dutch import’. It then goes on to chart the development of yachting – both sail and steam yachts – up into the early 20th century and explores the different rules that were introduced to achieve a fair handicapping system.

It also contains sections on the growth of yacht clubs; on yachting in other (English-speaking) parts of the world, and on some of the key characters involved in the sport. There are some beautiful black and white images which we hope to be able to add one day in a separate searchable database.

Given the date of writing, it is hardly surprising that it emphasises the patrician nature of yachting at this time. Sadly, it does not stretch into the end of this period, in the middle years of the 20th century, when yachting began to attract a wider social mix.

We have transcribed the book – credit to Volunteer Denise Davey who has masterminded and edited the whole – and offer versions in both html and pdf format.