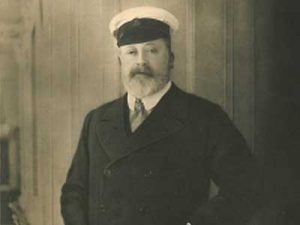 British Yachts and Yachtsmen contains an appendix on leading yachtsmen’s of the day, presented here as a separate section.

The order of the names in the book appears random although it starts with three royal names. For ease of access, we have presented the list in two groups: the three royal names followed by the rest in alphabetical order.

We are pleased to note that two women are included in the list – one a Duchess, another plain ‘Mrs’ – and others are mentioned in passing, but we have stuck with the title of the appendix used in the book.

British Yachts and Yachtsmen also contains and appendix on leading Yacht Clubs of the day.