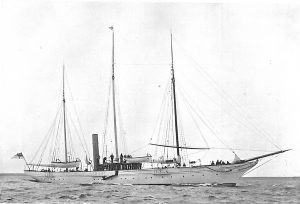 Frank Bibby was born in 1857, and educated at Eton. Being connected with the well-known shipping firm, he developed early a fondness for the sea.

Jason, his present steam yacht, was built in 1877 from the designs of Mr. St. Clare Byrne for Mr. Stewart, from whom a year later she was purchased by Mr. James J. Bibby, father of Mr. Frank Bibby. Mr. Bibby is for the greater part of the season cruising on board the Jason.