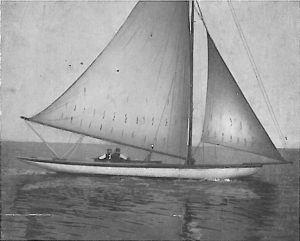 Was born in 1865 at Rochester, and educated at the Mathematical School, Rochester, and Rome House School, Chatham. He commenced yachting in 1889 with Mocassin, an American sloop, which he raced, and won one first and one third in the Medway Yacht Club races in 1890, and a first, a second, and a third in 1891, and a first in the Royal Engineers Yacht Club races in the same year. He then acquired Cock-a-Whoop, in partnership with Mr. R. F. Brain of Chatham, and raced her suc­cessfully. He next bought, and still owns, Triangle, which was built by Sibbick of Cowes. In one year’s racing she has won one first, two seconds, and two third prizes under the flags of the Medway Yacht Club and the Rochester Sailing Club.

Mr. Watson is also interested in rowing, and is a member of the Medway Rowing Club, of which he has been coxswain since 1898, during which time he has received twenty-three firsts in challenge races, including winning the only first in which a Medway crew have been successfully engaged on the Thames, the event taking place at Kingston Regatta in 1901.