Second son of the Earl of Sandwich. Entered the navy in 1853, and served in the Baltic Cam­paign of 1854. He was in the Black Sea to the end of Crimean War on board the 91-gun ship Princess Royal. He joined the Raleigh, sailing frigate (50 guns), under Harry Keppel in 1856, but the vessel was wrecked on her passage out to China in 1857. The officers and men were distributed among the British ships in Chinese waters, and he served in continuous actions in the gunboat Hong-Kong. He was present at the Battle of Fatschan Creek under Harry Keppel. He was subse­quently 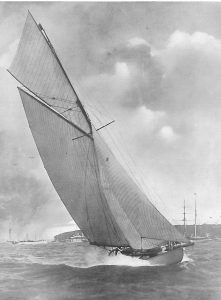 transferred to the Pearl, which, together with the Shannon, was sent to India to form part of the Naval Brigade during the Indian Mutiny, for which services he received the thanks of both Houses of Parliament. He holds the Baltic and Crimean medal with clasps, and fifth class of the Medjidi, Chinese medal and clasp, and the Indian Mutiny medal. The Naval Brigade leaves a record of having fought twenty-four engagements with the rebels.

He commenced yachting about 1880, his first boat being Netty. She was followed by Siola, a 20-rater. He then built Corsair, followed by Vendetta, Carina, and Rendez­vous, the latter a 29-ton cutter. Carina was the first English yacht to race and win at Kiel.