Is the owner of the first-class cutter Nyria, launched in 1906. Although a well-known polo player and sportsman, Mr. Young only commenced his yachting career in 1905, when he purchased the fast cruiser Merrymaid. He raced her consistently round the coast, and took part in the first Cowes to Clyde and Clyde to Cowes races, taking third prize in the latter, and receiving the prize from His Majesty the King at Cowes. At the end of the season he commissioned Messrs. Camper and Nicholson to prepare plans for a first-class 80-foot racing cutter. The new boat, christened Nyria, was launched on April 10, 1906. She is built to Lloyd’s highest class, twenty years. Her length between perpen­diculars is 96.5 feet ; l.w.l., 73.5 feet ; beam, 20.2 feet ; draught, 13 feet. Nyria is composite built, with teak planking, 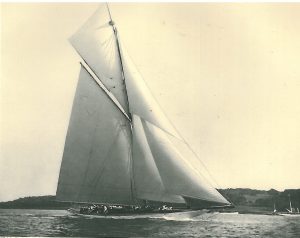 and ballasted with a lead keel weighing about 50 tons. Mr. Young is a member of the London Stock Exchange.