Was born in London in 1835, and educated at Eton and Christchurch, Oxford. 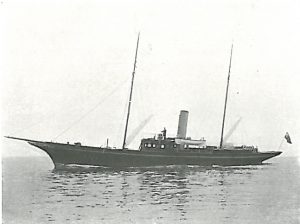 He now owns the s.y. Belinda, 173 tons. Mr. Cox’s family are all interested in yacht-racing, and when in 1886 he gave up racing Lil, she was kept in com­mission by his son, and later by his daughters, one of whom is at the present time racing in the Solent classes.