Was born in 1849, and educated at Trinity College, Cambridge. He is owner of the s.y. Yarta, 357 tons, designed by A. H. Brown, and built by Hawthorns and Co. of Leith, and an excellent cruising vessel, with which her owner has visited the West Indies, Cuba, the coast of Florida, and cruised in the Mediterranean and around the Scotch and Irish coasts. Mr. Morley was for seven years the owner of the 126-ton yawl Alruna, built by Ratsey of Cowes in 1874. This boat he raced for 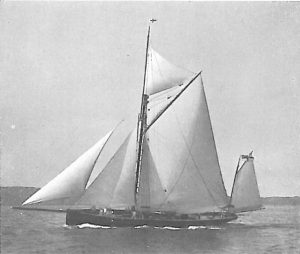 two years for the Emperor’s Cup. In the autumn of 1885 he accompanied Mr. and Mrs. Gladstone on their Baltic trip in the Sunbeam.