Breadalbane and Holland, Marquis of, K.G. 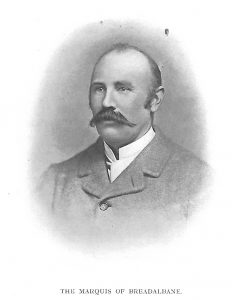 The Marquis of Breadalbane.

Is a member of the Royal Yacht Squadron, and keenly interested in yachting. He was born in 1851, and educated at St. Andrews. Following a military career, he had held commissions in the 4th Battalion Argyll and Sutherland Highlanders, and Captain of the Shropshire Yeomanry Cavalry. In the year 1873 – 1874 he was Lord-in­-Waiting to the late Queen, and from 1880 -1885 was Treasurer of the Queen’s Household. With the beautiful castles of Taymouth, in Perthshire, and Ardmaddy, Oban, the Marquis spends much of his time in Scotland, but he also devotes a great deal to yachting. He owns the s.y. Alma, 22 tons, built by J. White at Cowes, and the Fife-built cutter Leonora, a most successful boat. Was one of the founders of the Royal High­land Yacht Club, whose headquarters is Oban.