The Last of the Sailing Cutters 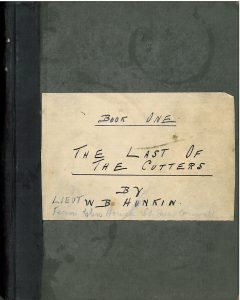 The cover of the first volume of Walter’s jourrnal

Walter Benson Hunkin, originally of Mevagissey in Cornwall, joined the Royal Navy in 1874 and served aboard a variety of small vessels employed on anti-smuggling, fisheries protection and coastguard duties right up to the First World War. Many of the vessels were sailing cutters. Much of his time was spent around Ireland, the Clyde and the North Sea. At the end of his career he came ashore with the Coastguard Service in Ireland in the troubled times of the campaign for Home Rule.

His diary was written in old age. As he puts it:

‘Some four years ago, having reached the age when one is apt to recall the past, the thought occurred to me that as my service career afloat had been spent in that branch of the Royal Navy known as the Coast Guard Cruiser Service, and that to the best of my knowledge no-one from the earliest days of the Revenue Cutters had even left the records of the story of their personal experiences, and that if I jotted down some of my recollections, at some future date it might fall into the hands of someone who, regarding it as a glimpse into the past, will consider it worthy of correction and a place on a library bookshelf. The following pages are the outcome of a literary effort by one with no pretention whatever to letters. It has been written from time to time filling in an idle hour now and again. Like many autobiographies, some of it is rather futile and probably without general interest, other items possibly amusing, entertaining and informative, and if were set out in print may help to fill in a dull hour for any casual reader.’

The diaries (two volumes) have been transcribed by Lyn Wills, a volunteer in the Bartlett Maritime Research Centre. We have divided it into two sections: his years at sea, first with the Royal Navy and latterly with the Coastguard Service; and then his life ashore when he took up a land appointment in charge of the Kilkee Division in south west Ireland during sensitive political times. As with other sections within Maritime Views, the text is available in both html and pdf formats.

The task of these ships including things like ‘To enforce the Sea Fisheries Act, 1883’ (as amended by the Act of 1891) ‘inside the British Exclusive fishery limits’.

Offences were wide-ranging including: