Aboard the Mary on the Weymouth station

Walter was now a Chief Petty Officer and joined the Mary,  a 30 ton cutter, based at Portland. The Weymouth district covered the south coast from just around Land’s End at Hayle to Christchurch harbour. 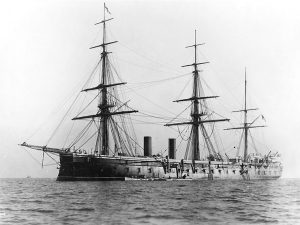 A transfer to HMS Northumberland, coast guard ship at Portland, for service in the thirty tons cutter Mary as Chief Petty Officer in charge with an extra nine pence per day charge money, was always looked on as a sure step to promotion to officer’s rank. Needless to say that it gave me pleasure to learn this was to be my next duty.

In due course I found myself on board of this small craft. The duties were of a pleasing nature and child’s play when compared with the duties of the cruisers on the west of Ireland; a run to Portsmouth now and then, or the removal of a coast guard when the stations were not far apart.

In March the south of England was visited by a terrific storm from the south east accompanied by an unprecedented fall of snow afterward known as “the great blizzard”. Telegraph wires, trees and buildings were brought down. The roads were blocked, railway and other traffic hung up for several days. On the sea the loss among shipping was very heavy. Fortunately we were moored in Weymouth harbour.

During the afternoon as the wind was freshening, before the gale had reached its full fury, a call having been made for the lifeboat, I landed and went over to the lifeboat house to render assistance if required. On returning on board I found that the Mary had parted her ropes and broken adrift and with difficulty with the aid of the crew of the cutter Delight had been re-moored.

The following day at the height of the storm with blinding snow, and visibility about two or three hundred yards, a London sailing barge running before the gale taking his chance, hit or miss, by a stroke of luck ran right in between Weymouth pier heads and up the harbour. Letting go his anchor to bring his vessel to, in swinging around he fouled another craft with consequent damage to both vessels.

I now decided to prepare myself for an examination for second mate, and set to in earnest to make myself more fully acquainted with the necessary subjects, navigation etc. On the day appointed for my examination I presented myself on board the district ship, there to appear before the board of officers, composed of the navigating commander, the gunnery and senior lieutenants. The Commander, a breezy gentleman, greeted me with a cheery word putting me at ease. That of course was helpful to me.

First came the oral part of the examination with the usual questions to which every sailor would be expected to know the answers. After which the navigator set the papers and questions in his particular subject leaving me to do my best. Finally the gunnery lieutenant gave me a test in drilling a squad of men etc. Thus the best of one’s knowledge was completed.

After a period of waiting I was called in and informed by the senior of the examining officers that the board had decided to grant me instead of a second mate’s certificate, a senior mate’s certificate, thus covering the two examinations in one. Needless to say this gave unexpected pleasure and satisfaction.

The district captain was a very pleasant and considerate gentleman with whom I got on very well and my period of service in this small craft was very comfortable.