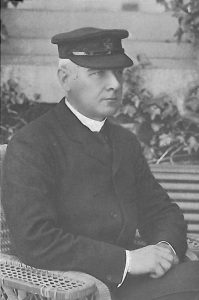 Was educated at Harrow, and entered the Royal Dragoons. He bought from Mr. Stewart Clark the famous yacht Vanduara, and owned the Velzie, 20-rater, designed by Mr. G. L. Watson, and built by W. A. Black and Co., of Southampton, in 1890. Velzie earned a good reputation for sailing, and with one exception, that 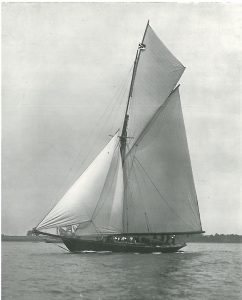 of Dragon, she was champion of the fleet.

Mr. Towers-Clark then commissioned Watson to design and Messrs. Henderson of Glasgow to build the Varuna. The yacht was a favourite with her designer, but she was outclassed by the Watson boat Queen Mab in 1893. When Queen Nab was withdrawn from the class, Varuna won twenty-three prizes out of forty starts. After selling Varuna he bought Lorna, 90-ton cutter, which he used for cruising.

He was an original member of the Solent one-design class, and built the C. Lark, which he raced for four seasons, during which time he lived on board the Lorna. Having dis­posed of the Lorna, he gave up yacht-racing, but he is still keenly interested in its welfare.