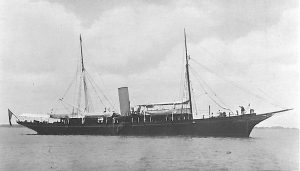 Sir Samuel is a well-known yachtsman, being owner of the fine s.y. Golden Eagle, 445 tons, the s.y. Rover, 19 tons, and the Westra, 24-footer, built by Sibbick at Cowes in 1895. Sir Samuel has taken great interest in yacht-racing in the Solent and cruising in British and Mediter­ranean waters.