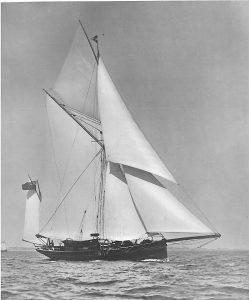 Was elected a member of the Royal Yacht Squadron in 1899. He is owner of the fine 163-ton yawl Lethe, which was designed by Mr. G. L. Watson and built by Fay in 1889. She is one of the finest cruising yachts from Mr. Watson’s board, and has won very many prizes, being particularly powerful and weatherly in hard breezes.