Second son of Sir George William Elliot, Bart. Was born in 1873. He was formerly Lieutenant in the 3th Hussars. 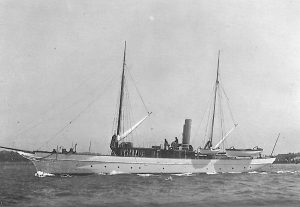 He is very fond of yachting, and spends a good deal of time cruising. He is owner of the Deva, steam yacht, 147 tons, built by William Allsup and Sons at Preston in 1878.