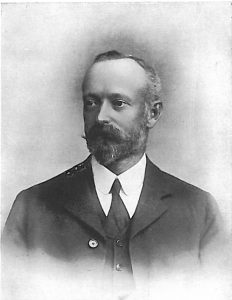 One of the most popular of Clyde yachtsmen, and a member of the celebrated Liverpool shipping family. Mr. Maclver is a grandson of the Charles Maclver who was one of the founders of the Atlantic Ferry, through the formation of what is now known as the Cunard Line, and son of Mr. David Maclver, also well known as steamship owner and Member of Parliament for one of the divisions of Liverpool, and at one time owner of such well-known racing yachts as Brenda, Shadow, Sunshine, and Gleam.

He was educated at Harrow and Trinity College, Cambridge, and after about ten years’ experience in his father’s yachts, he owned his first boat on Lake Windermere in 1886. Here he gained a reputation as a helmsman. He afterwards took out a Board of Trade master’s certificate, and navigates and handles his own vessels. He formerly owned the s.y. Solyst, 257 tons, and now owns the s.y. Marguerite, 181 tons.

He has built and raced with considerable success, in addition to the early Windermere boats, a series of vessels, the best known of which are Modwen (2½-rater), Alenda (racing cruiser), Avalon (Clyde one design), and Barabel, 36-footer. Among many prizes are included no less than three of the coveted ‘Points’ prizes, at one time a feature of Clyde class racing. He is a keen supporter of yacht-racing ; is Rear-Commodore of the Clyde Corinthian, and Vice-Commodore of the Royal Dee Yacht Clubs, as well as a member of the Council of the Yacht Racing Association.