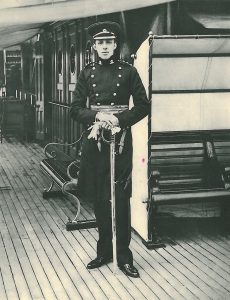 His Majesty the King of Spain.

H.M. the King of Spain is patron of the Real Club Nautico, and a member of the Royal Yacht Squadron. The Spanish royal yacht is the Giralda, 1,664 tons, built by the Fairfield Ship­building Company from designs by Cox and King, London. King Alfonso also owned the two cutters Giraldilla (6 tons) and Maria (8 tons), both built at Ferrol, and winners of trophies at Bilbao, Santander, and San Sebastian. Before His Majesty’s marriage he bought the 16-ton Nenufar, built by Fife in 1905, and renamed her Queen X, his selection of a bride being at that time a matter of interested speculation with his subjects.

King Alfonso is fond of the sea, and has encouraged the sport amongst the Spanish nobility. The grand regatta organized by the Real Club Nautico receives His Majesty’s special patronage, and handsome trophies are presented by the Spanish royal family for this event. His Majesty’s enthusiasm and influential interest has secured for Spanish yachting events a large amount of success. He takes a lively interest in the Sonderklasse, instituted by the German Emperor, and has had a little vessel built for it.

King Alfonso is a member of the Real Club Mediterraneo and the Real Sporting Club, and owner of the following yachts: the Giralda, s.y., 1,664 tons ; the Mouriscot, cutter ; the Reina Victoria, cutter. The two latter were built in 1906 at Ferrol. 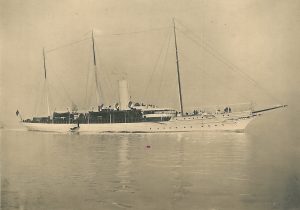 Giralda. His Majesty the King of Spain.