Lord Barrymore was born in 1843. He is one of the most noted of Irish yachtsmen, and Admiral of the Royal Cork Yacht Club. He married a daughter of Earl Dunraven. Educated at Eton and Christ Church, Oxford, he quickly acquired a fondness for the sea. He entered politics, however, sitting as Parlia­mentary member for Cork from 1867 to 1874. He was Vice-President of the Irish Unionist Alliance, and Vice-President of the Irish Landowner Convention. 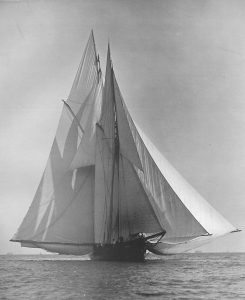 Waterwitch, Schooner, 160 tons. Designed and built by Messr. Camper and Nicholson in 1880.

He is a most popular senior flag officer of the premier Irish Club, as well as a member of the Royal Yacht Squadron. He owns the Waterwitch, 159-ton schooner, designed and built by Messrs. Camper and Nicholson in 1880.