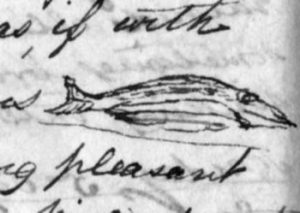 James’ illustration of a bonito

Journal of a Voyage from Falmouth to Brazil & back

James’ first voyage took him via Madeira, Teneriffe, Pernambuco, Bahia & Rio de Janeiro. In the process, he experienced setting foot on foreign soil for the first time; his first ‘crossing the line’ ceremony and his first banana which he found had a ‘sweetish insipid taste’ that he ‘did not like much’.