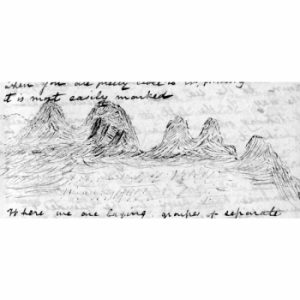 James’ sketch of the saw-tooth hills of Montserrat

Wednesday 28th August – at 6 this morning we were opposite the Town, called Plymouth, in Montserrat. The Master went on shore with the Mail, but being too lazy and consequently too late, I had not the pleasure of seeing the Town. I don’t think however, there was much to regret. It appeared from on board to be of such inconsiderable extent, that I should never have recognised, without being told, the existence of a place, having pretensions to the name of a town. A few houses, small & straggling, peering out from among the trees are alone to be seen – sed sedfue sub judice lis est. The town of Montserrat on its derivation, signifies a mountain serrated like a saw – and the fancied resemblance is not inappropriately recognised as some say. Many men, many minds i.e. different notions are entertained by different persons. If I had been asked what was the most natural resemblance I should have been puzzled what to say. I might have suggested something very different, but when once any one had started the idea of a saw, I should have agreed with him. In certain positions, when I have seen it in passing it before, I fancied the likeness was very considerable – but when you are pretty close to it, fronting the Town, it is most easily marked.

Where we are laying, groups of separate hills, irregular in form, yet pretty regular in succession stretch from one end of the island to the other – and from their perfect distinctness, form a scene quite novel to us & totally different from indiscriminate mass of those of the other islands. The slopes behind & above the Town, (which is close to water’s edge) well cultivated.