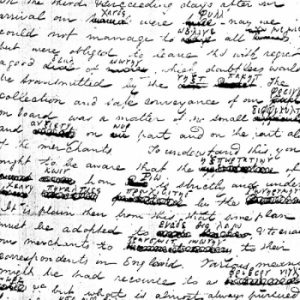 Example of a page with words heavily over-scored & obliterated

Monday 10th – anchored near the Sugar loaf, calms and tide against us. At 3 P.M. we reach our old birth in front of the City of S.t Sebastian or Rio. From the 10th to the 18th we lay at anchor, having been detained by M.r Aston our Charge d’Affaires. I have already said so much of Rio that I have left myself nothing more to add. My time was spent in going with or without a definite object thro’ the streets. I say with or without a definite object because the Captain being unwell on board, the Master was obliged to go on shore on duty in his room and I accompanied him. For want then of some thing [better], I shall give you [some account] of the way in which [we] were [employed]. The two first days after our arrival, were occupied in calling upon the different merchants, who are in the custom of shipping money for England, & telling them from the Capt.n that he would be [happy] to take [charge of] any [freight] which they might [care] to [send]. In the execution of this duty we had exercise enough, and what was more than we wished, the rain poured down in unintermitting showers – and as if this was not sufficient to give you a regular soaking, innumerable spouts from the tops of the houses discharged their contents on the luckless passer-by like so many fountains. All this might have been endured with tolerable patience – if any success had rewarded our labour – but no – not one merchant [upon] whom we waited happened just at this precise time to have any remittances to make to England.

[The next two pages have the appearance of a rough first draft. Whereas in the foregoing the italicised words within square brackets were written in Greek characters, on the next page the whole text was first written in English, and then key words heavily over-scored and obliterated, with the Greco/English superscripted. An example of one of these pages appears below]

[Embarking or getting Freight at Rio]

Our Captain then naturally concluded that he would receive but little benefit in the way of freight from Rio – & certain it is that he would not, if he had not been detained. For the Swallow Packet [16] had been out from Falmouth upwards of 10 weeks and was daily expected – the [rate of] exchange also was likely to be shortly affected in favour of England, and therefore some of the principal merchants petitioned for our detention and with success.

On the third and succeeding days after our arrival our [hands] were [full] – nay we could not manage to [oblige] all [who wished] but were obliged to leave, tho’ with regret, a good [deal] of [money], which doubtless would be transmitted by the [next packet].[17] The collection and safe conveyance of our [freight] on board was a matter of no small [difficulty] and [anxiety] on [our] part and on the part also of the merchants. To understand this you ought to be aware that the [exportation] of  [coin] from [Rio] is strictly and under [heavy penalties prohibited] by the [Government]. It is plain then from this that some plan must be adopted to [evade this law] & to enable our merchants to [transmit money] to their correspondents in England. Various means might be had recourse to as [Bribery night work] &.c but what is almost always pursued is the [use of belts].

These belts] go round [the body] and are calculated to contain about [five hundred] dollars each. When they are neatly made and properly supported, it is hardly possible to discover them under the loose [shirts] which [seamen] wear – and unless suspicion were excited by some other cause, this alone would defy detection.

In this mode then we proceeded to [get] our [freight in safety] on board. We first [called] at the house of the Shipper by ourselves – and in a short time afterwards were [followed] by some of our [crew] whom we proceeded immediately to [load] with their [cargo]. We had generally four at a [time] who [carried off] 2000. After they had [left], we [followed] & saw [them safely] off. These were [succeeded] by [others], and by the time the [second had] gone [on board], the [first] were ready [for us] again.

In two or three days, [by pursuing] this [plan], we [got off] a very considerable [amount of dollars]. Often, very often, we were in [great anxiety]and [perplexity]. We were [afraid] that the [frequent] coming & [going] of [our men] would [excite suspicion] – and therefore we sent [them first] to one place & [then to another] – and thus we certainly [avoided] one [source of danger] – but there was another which we [dreaded] and most justly [still more]. Several [of our men were] very[drunk] and not [fit] to be [trusted]. Notwithstanding, however all these circumstances [no accident happened]. All [the money] was [carried safely on board – there counted] – and if all was [right, the bills of lading were signed].

The [process] above mentioned was [a very tedious] one. After many [journeyings] backwards and forwards, [the amount of money] was comparatively small. To [expedite then our shipments], we undertook a [more compendious, tho more dangerous way] – which I can best [explain] by [giving] you [some account] of it, [when] I [formed one of the party]. We had [arranged to, go to Port, o, Fogo] two or three miles [off]. We prepared ourselves [accordingly]. A [pistol and cutlass for each] were put [on board, the master alone taking a musquet]. About [six o’Clock] while it was yet [broad day light off] we started [with our pennant flying right] in sight of the [Guard boat],  as if we were going to the admirals. The evening was lovely and the water smooth as glass. We laughed and chatted gaily as we moved swiftly along, and were continually called [calling] to each other to observe the beautiful scenery around, which at every bound by altering our position, perpetually opened up some new charm to our view. Altogether I had never been so much pleased with any excursion, and my only regret was that want of time & the pressing circumstances in which we were about to engage prevented us from contemplating the objects around us at greater leisure. At 7 oClock we arrived at our destination but [it was still too light] and [there were too many persons on the beach to render it safe to put the money on board the boat]. We therefore [entered the house] had some brandy and water and smoked several prime Havanah Cegars. When [the time] was, [fitting, nineteen thousand dollars were carried] from the [House to the boat] – as soon as they were [safely stowed] away, we [embarked] and set out on our return.

[Night expedition to bring off Freight]

A deep [darkness] now prevailed – nothing was heard but the [strokes of our oars], which were pulled [with as little noise as possible]. An anxious and [watchful eye was kept all around] in order [to descry the first appearance of anyone. The master loaded his musquet – and each of us his pistol & cutlass all ready]. Not a [word was spoken, for our] thoughts were too much occupied on other matters to enable us to enter upon indifferent conversation, and besides it would not have been advisable. As soon as we turned round a point of land, numerous lights were seen, the position of which enabled us to judge correctly of the route to be pursued in order to reach our vessel. We passed first one light & then another, [without discovering any thing to create alarm] – but the most [ticklish part of our voyage] was to [come] – viz. to [escape the notice of the Fort and Guard Boat], which was [lying close to us]. Had all around us been as [dark as the place we Had left, this] would [have] been a matter of tolerable ease, but most [unfortunately] as we [thought, for us, the church of Nossa Senora De Gloria, right opposite our Packet]happened to be this [night illuminated], and from its illumination close to the [waters-edge], a mass of brilliant light was sent across the water, pointing out distinctly the smallest object within its [radiance]. What a [contre-temps] for us. Either we must pass thro’ the midst [of the glare], & by being right between the [light] and [the] objects [of our dread], be at once [revealed to their view], or by going a long – round about way [to get to the dark side of the fort & Guard boat], at once [excite suspicion & run the risk of being overhauled. After an] attentive consideration of which of these two modes should be adopted we decided upon the former as after all being the most likely to [afford safety]. Accordingly we boldly struck out is a [direct line for the ship, expecting ourselves] to being [easily seen] but hoping [that the very] circumstance of our proceeding thus openly [would lull suspicion and lead those on watch to conclude, that our g[ig] was a man of wars boat on its way from the admirals to the flag ship]. Whether we were right in our anticipations a [of leading them astray] or whether in reality they were very lazy [or asleep we cannot tell – but all remained quiet]. You may be sure that [we did not feel altogether comfortable], whilst [we were [going] thro’ the ordeal. As] we approached [nearer & nearer to our vessel, the lead which oppressed ] & weighed heavy [upon our hearts] begun to be gradually lightened & was altogether removed when with joyful feelings we once more [put feet in safety on the deck of our main habitation]. No time was lost – & in a quarter of an hour [all the money was taken out of the boat – all the arms put in the armchest – and the boat itself hoisted into its place on the larboard quarter].

Such is the History [of] one of our [nocturnal expeditions, of] which we made [three in] all, & we equal success – & thus you can judge that what we [got in this manner, and our smuggling in the day; our amount total] would be considerable, in fact [upwards of one hundred thousand dollars].[18]

Having finished what I proposed to give you some idea of, I have nothing more to add respecting Rio – and I therefore beg you to let me pass over the minute trifling incidents of each day & to bring you to the evening of the 17th Dec.r, when we received our Mail & were appointed to sail next morning.