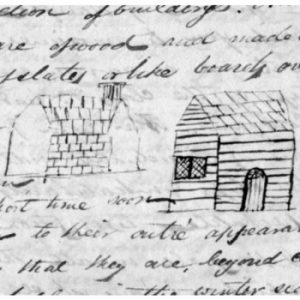 Thursday 25th June – this morning the Captain went for the Mail, and whilst he is on shore, I shall take the opportunity of spinning my yarn respecting Halifax. The aspect of Halifax is rather long drawn & narrow, but picturesque. If you come to the right hand side on enter.g  you incur great danger, but the opposite one is remarkably bold even close to the shore. The Town itself extends a considerable way along the water side, where it presents numerous small piers for the convenience of discharging the cargoes of vessels at the different warehouses. The appearance of the upper part of town, when seen from on board, is very good, and the effect is greatly heightened by the spires of the numerous neat and in a few instances, elegant Churches observable in every part. When you go on tho’ the look of every thing is new and strange to a European who has been accustomed to see so much stone and brick used in the erection of buildings. Almost all the houses are of wood, and are either in imitation of slates or like boards overlapping each other. At first sight you would not like them, but a very short time soon reconciles you to their outré appearance and I am told that they are beyond comparison, more comfortable in the winter season than those of any other material, and that they are much warmer. I said almost all the houses were of wood – but in a town like Halifax, which is a pretty considerable large! There are not a few which are built of excellent stone and brick, and there are several elegant & beautiful public buildings.

I can’t say much in praise of the Streets, which are without any foot pavement and are most of them furnished with convenient external excavations, or rather depressions, by falling into which unawares you have a good chance of breaking your leg or neck. All of the Streets which cross the breadth of the Town are very steep, and I think you will have some idea of them, if you imagine our High Street, as the upper part of Halifax town, where there are numerous off Streets, leading to the Cowgate, (which may be supposed to form the lower part of the Capitol of Nova Scotia.) By making this comparison, however I do it only for the sake of conveying to you some notion of Halifax – & by no means wish you to imagine, that the streets in it are as narrow, [or] as dirty – but only as steep, by the closes &.c leading down to the Cowgate. Far from [it] – the Streets are of considerable width – and both the shops & inhabitants of the most respectable description.

Taking all in all there is no place, which I have yet seen, which appears so much like home. The language, the dress, the food, the shape – vary in little of nothing in Nova Scotia from those in ‘Auld Scotland,’ & that this circumstance would have made me feel little or no regrets had we remained three weeks instead of three days in the Harbour.

Halifax, within these few years has risen to be a place of considerable influence, and no small trade is carried on with the West and East Indies. Here you may [have] obtained foreign productions, at a very reasonable rate, but there is little except wood and fish, which it has to export, and such is the plenty of the former, that if you chose to go and cut it down, you may have whatever quantity you require for your pains – nay in the interior of the country, the roads are formed entirely thro’ immense forests which the labour of centuries would hardly suffice to clear away.

Halifax is also a great mart for fish of every description, but chiefly Cod, Salmon &.c The quantities that are exported are almost incredible – but such is their excellence, that the supply is not greater than the demand. Of course to one who was fond of such fare and yet wished to stock himself cheaply, no better opportunity could be offered than to make a purchase of them here. The whole coast abounds with fish – and many vessels are sent to the various banks to fish, as Sable Island, but distant about 60 miles, Newfoundland Bank &.c – and I have mentioned in other parts of my journal that we saw several small craft at anchor, engaged in fishing.

All vegetable productions are very late, & very scarce here, but the Beef and mutton are both good & cheap. For the first time in my life I saw Indians while in Halifax. Their appearance completely upset all the previous notions as to dress &.cwhich in my mind I had been accustomed to attach to Indians. Instead of finding them half naked, with greasy bodies, and armed only with their quiver and arrows, those I saw were decently clothed after our fashion, and carried no offensive or defensive weapons. Their colour is what might be termed tawny, and is far from being so unpleasing as I had been led to suppose. Both men and women had long black hair, which communicated to the former an air of wildness – certainly not of effeminacy. Several of the ladies were very gaily decked out (i.e. tricked out) in dashing ribbons and a dress of the brightest colours – on their head they wore a masculine hat apparently of an excellent quality, which in their taste for shew, they had encircled at its upper and under edges with a broad band of gold lace, between which were placed three or four knots of gay ribbons.

I saw also several of their canoes which are made of the bark of trees artificially yet securely joined in its several pieces, and are so light as to be easily transports on the shoulders from one place to another. In smooth water, they can be paddled along with amazing rapidity, but the slightest accident will capsize them.