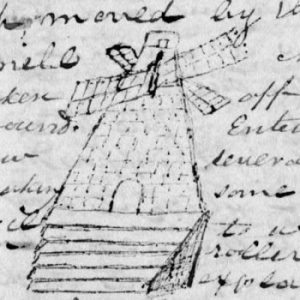 James’ sketch of a windmill in Antigua

Notes of a Voyage to & from the Leeward Islands

Compared to his previous voyages, this one was relatively short. It started with the Duke of York racing the Plover (a Man of War Packet) out of Falmouth. They hadn’t intended to race but after hearing that the Plover could “talk Spanish” (sail fast) they were surprised to find themselves overtaking her even though she had had a 7 mile head start. This resulted in much sniggering amongst the crew of the Duke and the showing of “symptoms of bravado”, which were “promptly put a stop to by the Master”.

James seems to enjoy this trip, particularly the warm weather and cool breezes. He wrote some very charming descriptions of the wind, including this lovely personification: “… the breeze began to blow … sighingly at first … but acquired additional vigour, and favoured a merry dance to a lively tune.”

He later describes his love of smoking cigars and says he would “recommend a person to become a smoker, particularly if he is solitary and impatient – it soothes the troubled spirits – it is a companion in solitude – a social member of a company – an alleviator of grief and an enhancer of joy.”

James and his companions were quizzed when ashore on the Virgin Islands by slaves and Masters for news of the emancipation of slaves. He admits that his view about slavery has changed during his travels and says that he is “sincerely glad that the name of slave will be forever abolished by us.”