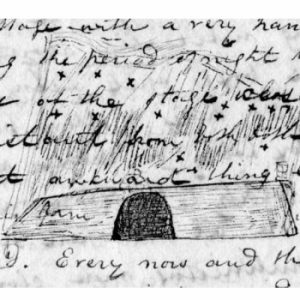 James’ sketch of the theatre at Buenos Ayres

James’ eleventh voyage on the Duke of York was the last time that a Packet ship would need to visit Buenos Ayres. In future, Packets would only need to sail to Rio because two man-of-war schooners would be carrying the mail on from Rio to Buenos Ayres.

Once they had finally landed at Buenos Ayres, James was entrusted with the ‘piloting’ of 3 lady passengers to lodging houses. This took many hours and was a very tedious task but James was “compelled to wear a complacent smile … while a frown & disgust would have been more truly depictured”.

Whilst in Buenos Ayres, which he described as being “like Sparta without walls”, he visited a museum in which “dust & dirt was almost all you could with certainty know the name of in the room”, churches, a cathedral and a theatre where he went to “recover the mental elasticity & slightness, which saints & images had dispersed”.

The “most ticklish part” of this voyage came in Rio when they embarked on a night expedition to collect ‘freight’. This involved them collecting money from different merchants to ship to England. Dollars and doubloons were allowed in a very limited quantity but slabs of gold were “strictly prohibited and must therefore be smuggled off.” James was obviously very uncomfortable with them transporting money as it is clearly reflected in his writing.

This was a very eventful voyage which ended with him discovering that one of the passengers whom they had taken on board at Buenos Ayres had been a fellow student at his school in Dumbarton.