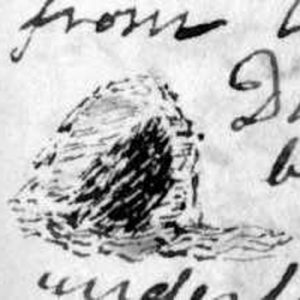 James’ sketch of the diamond rock

Having made this to me necessary qualification, let us proceed in order. S.t Lucia, in that portion presented to us, is like most of the other West India Islands I have seen is exceedingly broken and irregular, with at no patches of level ground, or appearance of cultivation – but exhibiting nothing but forests or barren ground. Numerous peaks appeared their woody summits in the back ground, while in the fore were many creeks and indentations. As we advanced to the NW end, signs of cultivation began to be visible, with houses. These cultivated spots were situated on level country in valleys between two hills – or more frequently along the slopes, and declivities of the mountains. The hills themselves were covered to their highest elevation with trees and brushwood. Their number seemed almost countless, and the eye rested first on one and then on another so frequently till the powers of observation were perfectly perplexed and confounded. Truly it might be said that ‘hills peer over hills tho’ Alps do not over Alps arise. The variety of form was likewise an other source in preventing distinct definite impressions of the Island from being conveyed to the mind which was consequently in a complete chaos from which it would be utterly impossible to extract any thing, like a connected whole. Every mile we proceeded also changed our view, and presented what we had already seen under a very different aspect. At the NW end is a very small Island, called Pigeon Island – barren & partly covered with stunted trees. Hereon is a fort, flag staff for conveying intelligence to the Town – and excellent barracks of brick whose numerous arched apertures for light and air communicate a very pleasing effect.

After passing this a greater number of cultivated spots, with their usual accompaniments of large houses & negro huts – and I remarked one pretty features in particular, formed by a large cluster of dwelling houses built on a most beautiful knoll, and encircled on every side with distant & separate hills. Close almost to the waters edge numerous conical shaped hills arise, having very little slope, with valleys between. On, on we go for a few miles, when we find that the shore sometimes makes a fine sweep or curve, in many parts of which the white clean sands contrast beautifully with the darker colours of the barren rock or wooded slope. Here and there a rocky islet, of a very [few] yards in circumference raises its modest & unattractive head to shew the mariner the danger which too near an approach would produce. We were still within sight of Pigeon Island, when we descried another flag staff, and extensive barracks on the top of a hill, which I believe had been levelled in order to build upon it. This almost overlooked the Town, which was as yet hidden from our view – but not long, for in twenty minutes we had opened up the small Bay, in which it is situated.

At 10.30 I accompanied the Master on shore with the Mail. The name of the Town (the Capital & indeed the only town on the Island) is Castries. It is situated at the bottom of a small but pretty bay & at the foot of considerably high hills, which render the atmosphere very hot. The Bay is one of the best among the Windward Islands – the land is very bold, and men of war might ride there in safety even during a hurricane.

We had abundant time to contemplate the Bay in all its parts as we had pulled ashore the whole way, it being impossible for the Packet to enter from the wind being foul up the Harbour. On board our vessel outside, the Town did not look very well, and a nearer view did not tend to remove our first impressions. We landed at an excellent wharf, opposite to a row of houses, in one of which was the Post Office, or at least the store, where the Mail was required to be delivered. This was our first object to visit, and when we had done so, we took a stroll to spy out the nakedness of the land. You are to remember that this Island of S.t Lucie formerly belonged to the French – that the Town was built by them – and tho’ he whole was ceded to us in 1814 the French inhabitants still remained & enjoyed the protection of our government. The town is of very small extent, but differs considerably from the construction of our English towns in the West Indies.

It consisted of two or three very long streets, which are cut at right angles by others in a transverse direction. These are most excellent. They are of considerable width, the whole admirably paved with whinstone, with the exception of a wide footpath of brick. I was never better pleased with any thing I had yet seen here – and I was very sorry to notice that the grass was growing in the excellent Streets.

In the course of our perambulations we fell in with two large open spaces of ground, in the form of squares in which some lofty trees spread a pleasant shade, under which on public seats placed there you could enjoy yourself much to your comfort and satisfaction. With the exception of the Government Offices – a few private dwellings – a small theatre, the houses are built of wood, & their sides are formed of the same material cut into small pieces to look like slates. I saw not a single balcony – nor any plan afford pedestrians the blessing of a shade. From the height and close proximity of the surrounding hills, the atmosphere is insufferably close to a stranger – But the inhabitants heed it not – for they sit in their houses or in their stores all day, and only creep out like owls, when the suns burning rays are about to be quenched in the Western waves.

Very few people were to be met with in the street – and even in the Markets only about a score of women exposed a few bananas – yams – charcoal & limes for sale. The language commonly spoken is French – particularly among the negroes. There is no peculiarity of dress – but I fancied that I could recognise the French features.

I observed no buildings which I should consider to have been a church – but I know from others, that there are both Catholic and Protestant places of worship. By mere accident we found out the Theatre. It was very small – not much larger than many private rooms I have seen – but very well arranged for boxes, pit & gallery. The performance of this evening was to be by amateurs, and in the French language. This is the first time I have been behind the scenes or on stage, which was indeed the case, owing to the civility of a French gentleman we met there.

I was glad to find that education was not neglected here – or if unattended before was now about to receive its just share of regard. I saw a notice announcing that under the patronage of the Bishop of Barbadoes a school was to be immediately established for all. Indeed a new impulse seems to have [been] given by his Lordship, to revive and invigorate the various institutions for the spread of education, & its concomitant blessings morality & happiness. Where no such institutions existed before his Lordship has exerted his interest with the gentlemen of property – and liberally contributed from his own funds, towards an object so important to the present & future welfare of our colonies.

I shall take leave with only two additional remarks in Castries. When under the French Government, the streets were known by French appellations – but since we have had it, we have made a very slight change – as for instance I notices ‘Bourbon Street = Grande street” &.c

In passing one of the streets I met with an odd combination of a trade & a profession – for one J. Grimes, designated himself, in large staring letters as “Mathematician and Sail-Maker.” Explain this who can – I am sure I can’t – for I don’t see the connection between them.

Exactly at noon we left the town to return on board – and gladly for we were tired & thirsty, not having found any one charitable enough to invite us to a seat or a draught. This proves that, what is every body’s business, is no man’s business – and I am persuaded that if we had had a letter of introduction to one particular individual we should have been received most hospitably. However I think the Post Master might have shown us a little attention – but presto, but let that pass – let that flea stick to the wall – and behold us rejoicing to pace one more “our ain decks”& procuring with delight the refreshment we so much required.

Soon after we got on board, the command was given to hoist up the gig on the quarter, and all hands heave up the anchor. The winches were manned with resolute spirits & strong arms – and under their united influence, the weighty anchor uprose out of the water – Next the sails were loosened, & our course steered for Martinique, distant about 45 miles across. The wind was fair, but rather light so that we rose the island but slowly. Its appearance at a distance is almost the same as I have described most of the other West Indian Islands to present. It is of considerable extent and along with Guadeloupe, constitutes the only possessions of the French in this Quarter. While afar off its hills and mountains are mingled together and their rough distinctive features softened down to an, apparent unbroken continuation of high land. Every mile however you gain upon it, brings out each hill & broken mountain into prominent relief. While I am writing from the South end to a very bold bluff point, rising up to a lofty and well defined mountain, the coast forms a very extensive sweep, or curved Bay – and near to this Bluff headland a very remarkable, bare, barren and almost perpendicular rock rises from the sea, called the diamond rock.

During the war with France, our brave seamen hoisted two pieces of cannon on the summit, an undertaking believed to be unpracticable greatly to the astonishment, but more to the danger and annoyance of our no less enterprising enemies.