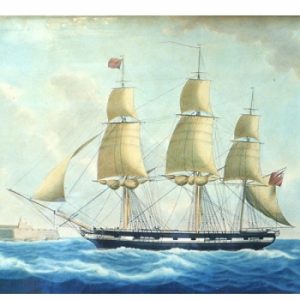 The National Maritime Museum Cornwall (NMMC) is fortunate in owning six Packet Ship portraits by the noted pierhead painter Nicholas Cammillieri (1773? – 1860). These were all painted in Malta in the first half of the 19th century. The six works by Cammillieri which are owned by the NMMC represents one of the larger collections in any museum.

The National Maritime Museum at Greenwich has eight, the Peabody Institute at Salem about the same number and the Maritime Museum at Malta five. Other Cammillieri paintings of Packets from this period have survived; the Royal Cornwall Institute at Truro owns one of the Osborne and L.E. Briton uses several others as illustrations in his study The History of the Sailing Packets of the West Indies published in 1973. Cammillieri could have had the opportunity to paint at least fifteen Post Office Packets. The Cornwall Cammillieri collection though is unique in its coherence of subject matter.

The six portraits were painted between 1817 and 1823 and illustrate the ultimate development of the Falmouth Packet Service under the Post Office private contract service.

Who was this artist? Why did he paint these pictures and what exactly is a pierhead painter?

In this series of articles Bartlett Centre researcher, Ron Hawkins, reviews the pictures, the artist and the work of pierhead painters in general.