The fact alone of having a fine sheet of water on which to sail one’s matches and hold regattas is not sufficient to guarantee the success of a yacht club, so far as that success depends upon attract­ing visiting yachts to its regattas. The Royal Forth Yacht Club probably realizes this fact. 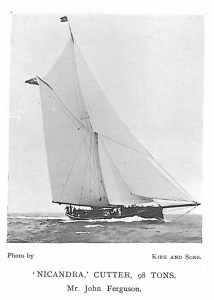 The club was founded in 1868, and has always been conducted in an energetic manner; but it is some years now since any of the big racers which do the ordinary round of the regattas paid a visit to the Firth of Forth. The fault does not lie with the club, which has made every endeavour to make its fixtures attractive. The first regatta was held in 1869, but, with few exceptions, the club has had to depend for entries upon local yachts, and those which put in their whole season on the East Coast. The reason for this is none other than the geographical position of the district. With the Southern regattas crowded closely together during the season, there is no time left for vessels to even contem­plate a trip to the North. There has, however, been some very fine racing under the club’s burgee, and the West Challenge Cup, presented by the late Mr. T. B. C. West, at one time owner of the Wendur yawl, produced some keen racing. Sir Donald Currie is the

Commodore of the club, and the Vice-Commodoreship is occupied by Mr. J. Ferguson, who owns the grand old cutter Nicandra, better remembered as the Vanduara. This famous old flier carries the Royal Forth burgee round to the majority of the regatta ports during each season, but she does not now take part in many races.