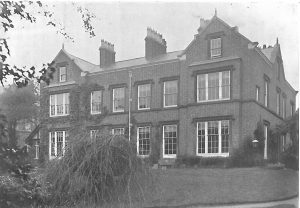 In connection with the history of the club one incident is worthy of the admiration of all yachtsmen at all times. On August 24, 1848, the emigrant ship Ocean Monarch, of Boston, was destroyed by fire in Abergele Bay. Mr. Thomas Littledale, Commodore of the Royal Mersey Yacht Club, with his yacht Queen of the Ocean, saved the lives of thirty-two of the crew and passengers of the fated ship. In recognition of such a signal deed a testimonial was presented to Commodore Littledale.

Some memorable matches in connection with this club have been sailed. In July, 1848, the Sultana, 100 tons O.M., owned by Mr. R. C. Naylor, a banker, and member of the Royal Mersey Yacht Club, raced round Ireland against the clipper barque Panic, 400 tons, and the Sultana won. The distance was 896 miles.

The club-house, No. 8, Bedford Road, Rock Ferry, is pleasantly and conveniently situated within 100 yards of Rock Ferry Pier.

Owing to the generosity of members, both past and present, the club possesses a very interesting collection of models, pictures, and photographs