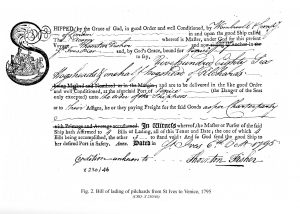 All British and foreign merchant vessels, whether Fair traders or Free traders, however big or small, had to have ‘legitimate’ Bills of Lading, for any and all cargo carried on board each vessel. Typically of the era, the following is an example of a British ‘fair trader’s’ Bill of Lading for an export cargo of Pilchards, per the Acorn, which cleared from St. Ives for Venice on 6th October, 1795.

Free trading smugglers, sailing out of Guernsey (and/or other Channel Islands) carried similar bills of lading for their ‘contraband’ cargoes, ostensible destined for an acceptable foreign port, but in fact intended to be run somewhere on the English coast. One of the most frequently declared ports of destination, nominated by the smugglers was the Norwegian port of North Bergen – a good week’s sailing distant from the Channel Islands, with a legitimate round voyage taking three weeks to complete; wind and weather permitting.

Hon.ble Sirs, We beg leave to lay before y.r Hon.ble Board that we have now in this Port a Spanish Sloop laden with Brandy & Wine (in hogsheads) who at first reported from Guernsey to North Bergen or the Isle of Man, but afterwards (by his Interpreter who is an Irish Man) said he did not know whether he should go to North Bergen or the Isle of Man, the Wind since he has been here (nine days) has been several times fair for either, but only waits an Opportunity to Smuggle her Cargo on this Coast, as has been too frequently practiced, & particularly very lately one under the same Colours made near the same Plea, but as soon as under Sail had several Boats a longside of her discharging her even in sight of this Port. We humbly request your Hon.rs Opinion whether any thing (& what) might be done in the above Case for the Benefit of the Service. We have no boat here belonging to the Customs but presume one would be of great Utility.

Gentlemen, We have received Your Letter of the 22nd instant setting forth that a Spanish Sloop laden with Wine & Brandy is arrived in Your Port and that the Master reported from Guernsey to North Bergen, but has since said that he does not know whether he shall go there or to the Isle of Man. And it appearing that the said Sloop has been in Port nine days, though the Wind has several times been fair for either of those places, We direct You in case the Sloop be of fifty Tons burthen or under to pursue the Regulations prescribed by the 8th section of the 5 George 1st, Chap. 11 with respect to Vessels hovering on the Coast, reporting to us Your proceedings.

While the ruse was a very common one, there was nothing the Customs authorities could do about such vessels until one was detected in British waters, and the officials had a good legal reason to check their papers and search the vessel – suspicion alone was not enough.

Thus it was that the practice was still in every-day regular in the first decade of the nineteenth century. By 1805-06 the Board of Customs had watchers in Guernsey reporting back to the Board in London, of the loading and sailing of suspect traders. This information was posted out to all the Collectors in the out-ports. –

Gentlemen, Information having been received that the Cutters mentioned on the back hereof, are now lying at Guernsey, and Supposed to be employed in illicit Trade and that there is reason to believe that great Quantities of Goods will be attempted to be run from on board the said Vessels.

I have it in command to direct you to communicate this matter to all the Officers of your Port, particularly to those of the Waterguard, as likewise to the Commanders of such Admiralty Cruizers as may be stationed at or in the neighbourhood thereof, and to excite them in the strongest manner to keep a good look out, and to use their utmost endeavours to intercept and seize any Goods that may be attempted to be run from on board the aforesaid Vessels, taking care to appraise the Board of any matter that may arise fit for their Cognizance.

The Admiral Saumarez Schooner, of Guernsey, cleared for North Bergen, with Thirty-four Pipes of Brandy, Six Pipes of Rum, and One hundred and ten Bales of Tobacco.
The Speculation and Union Luggers, of Guernsey, sail with the above schooner, the latter to take the Spirits, and the former the Tobacco; the Tobacco is intended to be landed in the North of Ireland, and the Spirits in Cornwall.
The Swift Brig, with Pipes of Spirits, and Pipes of twist Tobacco.
The Intrepid Lugger, and Lily and Good Advice Cutters, sail with her, with empty Ankers.
The Lord Duncan Cutter, of Hastings.
The Idas, the first of Hastings.
The Idas, the second of Hastings.
The Midas, of Hastings.
The Dash, of Hastings, and
The Dover, of Guernsey.
All Cutters are loaded with legal Casks of Spirits, Tobacco, and empty Ankers.
The Dover is bound to Ireland, but the five Hastings Cutters intend landing their Cargoes on the Coast of Sussex, or North Shore. [*]

In the four months from November 1805 to the end of February 1806, some 44 vessels cleared from Guernsey for North Bergen, another 23 for Tonningen, and a further 18 for North Faro – all suspect destinations.

One of the more frequent transgressors being one John Phillips, captain of the cutter Idas, of Hastings, who completed ten such voyages during that period – three of them between November 1st and the 15th, two in the December, another three in January, and two more in February.

And so it went on.

Note: the Bill of Lading itself is a wonderful piece of copy, typical of its time. A transcript is:

Shipped by the Grace of God, in good Order and well Conditioned by Wombwell and Company of London in and under the good Ship called The Acorn whereof is the Master, under God for this present Voyage Thornton Fisher and now being [riding at anchor] in [the] St Ives Pier and, by God’s Grace, bound for Venice to say Five hundred Eighty Six Hogsheads & one half hogshead of Pilchards [being Marked and Numbered as in the Margin], and are to be delivered in the like good Order and well Conditioned, at the aforesaid Port of Venice (the Danger of the Seas only excepted) unto the Order of the Shippers or to their Assigns, he or they paying Freight for the said Goods as per the Charterparty [with Primage and Average accustomed]. In witness whereof, the Master or Purser of the said Ship hath affirmed to 4 Bills of Lading, all of this Tenor and Date; the one of which 4 Bills being accomplished, the other 3 to stand void: And so God send the good Ship to her desired Port in Safety. Amen. Dated in St Ives 6th Oct 1795. Condition unknown to Thornton Fisher