Built in 1925, for Edward James Williams, of Cliff House, Porthleven, and Thomas Kitchen Williams, of Peverell Rd., Porthleven, she was first registered as the Breadwinner~PZ.121, on July 3rd of that year as an auxiliary motor lugger.[*] Working lines and nets, with an inclusive crew of four men, Edward Williams was her registered first skipper, and her dimensions made her 20.15 tons, well above the 15 ton threshold for 1st Class fishing boats.

She was not named Breadwinner for long as on October 14th 1926 she was re-named Biddy, presumably after a female family member of one of the owners. Her other details and dimensions remained the same at that time. However, in 1928 she was re-measured [when deductions for her gross tonnage were allowed for machinery space, which reduced her registered tonnage to 12.25 tons, technically making her a 2nd Class sea-fishing boat.

Sometime prior to 1932, she was photographed with other Porthleven boats, anchored in the harbour channel.

Like a number of her contemporaries, she has a wheel-house aft, and would have had wheel steering gear, instead of a heavy tiller.

Still owned jointly by Porthleven fishermen, by July 1937 Thomas Kitchen Williams, had moved to Secluded Cottage, and Edward’s interest in the boat had been sold, or passed to Charles Garfield Eddy, of Sea View, Mount’s Road, who became her skipper on July 26th, 1937.

Not surprisingly she appears in a number of photos of this era in Porthleven harbour. 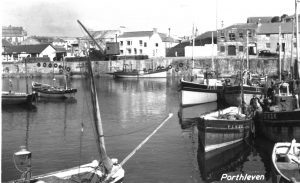 – if somewhat distantly; and slightly out of focus – 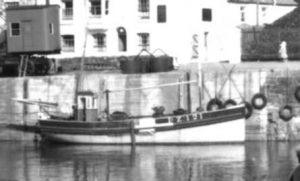 Or partly obscured by another boat. – 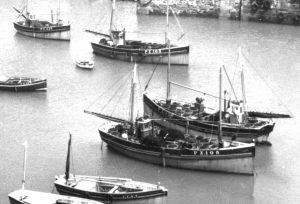 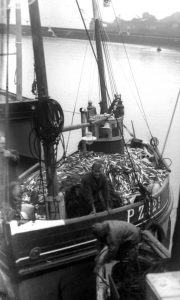 Prior to the Second World War she only made occasional landings of pilchards at Newlyn – usually late in the season. Given that during three of these pilchard seasons her Newlyn landings were made in November or later, it seems that most of the time she landed her catches at Porthleven. However, during this period she was photographed at Newlyn with an immense catch of pilchards on deck. Despite the smile on the crewman’s face her crew faced many hours of back-breaking work unmeashing the catch before it could be landed. Newlyn Harbour records make it highly probable that this catch was made during week-ending August 14th 1939 – the eve of the war. During that week she landed over 50 thousand pilchards. In all she landed over 160,000 fish at Newlyn that last season before the war, making £101, for nine weeks’ work.

On June 16th, 1940, Biddy was one of more than 30 Penzance & St. Ives registered fishing boats recorded as then being in Falmouth waters. Her register does not record her as having been commandeered by the Admiralty during the war – though many boats of her size were.

It is highly probable that during the 1930s her owners contracted with one or other of the pilchard curers at Porthleven for their season’s catch at a pre-determined price – possibly Pawlyn Bros. Just after the war, in January 1946, the Biddy came into Porthleven fish-merchant and curer William Strike Pawlyn’s hands but only for a few months – possibly as security for a loan to the Russells.[*] During this time J. G. Russell was her skipper, and she was sold on to Arthur Russell, of Unity Road, Porthleven,  who became her registered owner on August 1st 1946, and L. Russell became her fourth skipper. She continued working out of Porthleven and Newlyn until June 1969, but I have not looked into her post-war fishing records.

In June 1969 she was acquired by Archibald Morrison Hay, of 11, Mowbray Road, Fleetwood, and worked out of that port, where an E. Falcner became her skipper.[*] Hay moved houses twice during the next twenty years or so, and while the boat notionally worked out of Fleetwood, but her port of registry remained Penzance throughout.

How active she was as a fishing boat during this later period is not known, but she appears to have been transferred to the new computerised registration scheme, as on 22nd April 1989, the office copy of her old register was stamped.

Initially the Breadwinner / Biddy does not appear to have been on the books of the Cornish Fishing Vessels Insurance Society [whose first minute-book Morgan Hosking kindly let me borrow, back in the 1970s]. However, on October 19th 1946, shortly after Arthur Russell acquired her, the Society accepted Biddy in the value of £1,000. At the same meeting the committee agreed to cover the Renovelle [W. S. Capps, Newlyn, £1,500]; Ayronwen [W. Blewett, Newlyn, £375]; Renown [T. W. Thorpe, Mousehole, £200] and Pioneer [H. Hendy, Penzance, £1,000]. In the years following there was a steady trickle of claims.

In 1956 the Biddy received ‘extensive damage sustained while lying beside Custom House Quay, Falmouth.’ The claim now under consideration being for £39 18s 6d. The cause of the damage was not recorded, but there was a similar claim for damage to Maid Marion. Payment to W. S. Oliver, on account of repairs to the Biddy, of £38 13s 6d, was approved in January 1957 – and £9 5s. 6d. for the Maid Marion. I have no information on any further claims, the minute book that I had borrowed from Morgan Hosking recording that they had been ‘transferred to new book – 27.8.1960.’ Which I was not allowed to review as it was still current in the 1970s, when I made the above notes.