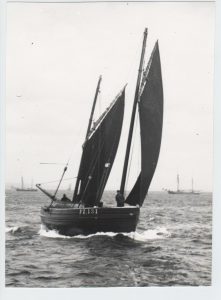 The Edgar ~ PZ.313  beating up for Newlyn in a fresh north-easter.

The Edgar was built at Mousehole by, William Williams, in 1902 – one of the last fishing luggers ever built there. I have yet to find an account of her launch, but she was mentioned in passing in a Cornishman newspaper report on boatbuilding at Newlyn, published in May 1903: ‘That excellent craft, the Edgar the finest and largest of all the Bay boats, was built only a few months since by Messrs. Williams and Sons’. Built to the order of Mousehole fishermen George and Percy Laity, she may not have actually been the largest lugger in the ‘bay’, but she was certainly one of them, and a very fine 1st Class mackerel driver.

As caught in this image, her punt is on deck, which suggests that she was returning to Newlyn from distant waters – either the North Sea, or one of the Irish fisheries. Behind her two laden ketches are sheltering in Mount’s Bay.

The Edgar was registered at Penzance, as a British Sea Fishing Boat, on November 7th, 1902. She was then given the fishing number PZ.131, and was of the following registered dimensions:

Initially she was a drift net fishing boat, employed in the seasonal mackerel and herring fisheries, while at other times of the year she was engaged in long-line fishing.

For the first seven years she worked under sail power alone.

MOUSEHOLE mackerel fishing began on Monday with a decided improvement, most of the boats being fairly well fished. Amongst the “shoaler” boats the Volunteer did well, securing twenty-two hundred of superior quality, the fish generally being better and larger. On Tuesday night all boats were at sea, but unfortunately, the weather became rough, and with it the fish seem to have taken off. What was taken were of s different quality, small and scarce. On Wednesday a strong gale raged and the later boats had rather a severe time in getting in. The Mousehole boat Edgar had its sail split by a heavy sea striking it. The baulks were put down during the day to protect the craft in the harbour.[*]

During the 1905 mackerel fishery, she landed an unusual catch:

The fishing boat Edgar, of Mousehole, landed two stowaways on Saturday. The stowaways were handed over to the Edgar whilst at sea, by the Neville, of Blackpool, which left Liverpool on Wednesday last. The Neville was bound to Victoria and Vancouver. The names of the men are Daniel Preston and John Moore, and at present are in Penzance. [*]

Later that summer Mousehole boats set out for the North Sea once more, but not before the tragic death of the wife of one of the Edgar’s crew.

The Ben MaChree left Mousehole on Monday for the North Sea herring fishery. The boats Emblem and Edgar were to have left the following day, but one of the crew of the Edgar was obliged to stay on shore on account of his wife’s illness, and unfortunately her death through confinement. Consequently a new hand had to be procured for the Edgar. Mr. Theophilus Trewavas, a relative of the owner was prevailed upon to go, and the boat left on Tuesday evening.

A death under very sad circumstances occurred on Tuesday. Mrs. Wallis, wife of Mr. John Wallis, of Mousehole, passed away quite unexpectedly during, or shortly after confinement. Mrs Wallis was the daughter of Mr. George Eddy, of Mousehole, and great sympathy is felt for the bereaved husband and relatives. The child has since died.[*]

In some seasons the fishing was a complete disaster.

MOUSEHOLE: The spring mackerel season is passing away quickly, and up to the present no fish has been taken.

Several fishermen, on account of the scarcity of fish, have been driven to seek employment at St. Just [in the mines]. Others have gone to Southampton to seek for berths in the yachts being fitted out there.

Up to the present the mackerel fishery is still a blank. On Tuesday night a few boats shot without the slightest success. One boat Edgar lost a considerable number of nets, being cut off by a steam trawler. This and no fish makes it doubly hard for the unfortunate fishermen. [*] 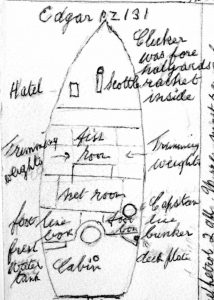 Note the position of the capstan, forward and starboard of the mizzen mast

The register entries do not give much information on her shape, but a sketch of her general arrangement made for me by Sidney Pender, back in the 1970s, shows her to have had a transom stern.[*] Like many of the first class lugger, she was fitted with a steam capstan for hauling the foot-lines securing her fleet of mackerel drift-nets, but, unusually for a Mount’s Bay lugger, it was located further aft by the net-room, rather than forward of the fish-room.

This positioning of the steam capstan was not a successful arrangement. When hauling the fleet of nets, the footline –hauled in by the capstan – ran aft from a fairlead set on the starboard bow, across the work in hand by the fish and net-rooms, In a plunging sea it had a nasty habit of jumping out of the fairlead, and sweeping aft across the rail and deck, giving anyone caught a smart smack, if nothing worse.

On ‘29/11/09’ the office copy of her register was amended to the effect that she had been converted from sail power to ‘steam,’ but this was a mistake on the part of the Custom House officer keeping the register. 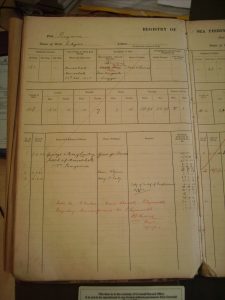 MOUSEHOLE: The fishing boat Edgar, of Mousehole, is being fitted with a motor engine, and on Thursday went on her speed trial, steaming or motoring from Newlyn around Mousehole Island and back to Newlyn. Whilst passing the island the Edgar seemed to be moving at a good rate. [*]

MOUSEHOLE: The fishing boat Edgar left for Padstow on Monday morning to engage in the herring fishery there. She is the first Mousehole boat fitted with a motor engine, and it is hoped it will prove a success so that others may be introduced to give them a trial. [*]

In another of Sidney Pender’s sketches for me, he depicted her unusual engine arrangement, whereby her ‘first’ engine (a Fairbanks), was installed in the cabin aft – as opposed to being installed forward as in most other Mount’s Bay boats motorised at that time. This installation Sidney dated to 1907-08, but must have been the engine installed in the autumn of 1909. 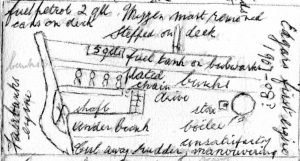 Basic as it is, Sidney’s sketch shows that the power of the engine was transmitted to the shaft by means of a ‘plated’ chain. There were three ‘coffin’ bunks, side by side against the transom, as well as the usual couple of berths on either side of the cabin, with the engine taking up most of the space in between. This was a most inconvenient arrangement and it is possible that the cabin table was rigged over the engine at meal times. Because the engine was located just over the spot where the step for the heel of the mizzen mast used to be, the mizzen mast was now stepped on deck. 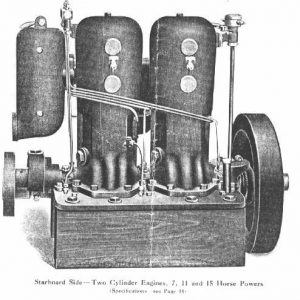 This illustration of a Fairbanks engine is probably half the size of the one fitted in the Edgar, as Sidney’s sketch seems to depict one with four cylinders.

The Edgar’s register indicates that her ‘steam engine’ was replaced by an internal combustion engine of 26 h.p., which was in turn replaced by one of 55 h.p. But these are undated amendments. As noted above, the Custom house officer at Penzance in charge of the ‘register,’ seemed at a loss how to describe these newfangled motors, and uses the words ‘steam,’ or ‘steamer,’ erroneously on several occasions in 1909-10. During this era the magazine Motor Boat was actively promoting the installation of motors in smaller fishing boats – that is to say boats not big enough to carry a full steam power plant and engine.

The Edgar ventured in the North Sea herring fishery that season, but it proved a disappointing one for all concerned.

The Emblem, Comfort, Nellie Jane, and Edgar arrived on Sunday afternoon from Scarborough. The Children’s Friend came on Monday. The season has been an exceptionally slight one. The Ben-ma-Chree, is remaining behind at Lowestoft to engage in the herring fishery in that poet. [*]

In October 1910, shortly after she had returned from the North Sea, the Motor Boat published the following report in evidence of the benefits of motor fishing boats, as related to a fine enclosure of pilchards at Porthgwarra:

‘A telegram was sent to Penzance, seven miles away, and, as a result, the motor boats Edgar, belonging to Mr. Laity, of Mousehole, and Lamorna, owned by Mr, Jeffery, of Newlyn, were on the scene of the fishing operations within an hour, and prepared to carry the fish back to port.

As is usual throughout Cornwall, the boats carrying the fish to market are recompensed by means of a share in the sum obtained for the fish which they carry back; and in this case, where Edgar was drawing a one-sixth share in the proceeds, she earned no less than £45, the 90 hogsheads which she carried to Newlyn being sold for £270.’

New opportunities occasionally arose on account of the new engine. Shortly after she returned from the North Sea in September 1910, the Edgar towed a schooner into Newlyn – no doubt for a consideration; [*] and in November 1912 – “The three-masted schooner William Ashburner, of Arklow, arrived at Mousehole on Wednesday with coal in tow of the Mousehole motor fishing boat Edgar.” [*]

Windfalls aside, the different fisheries were where her crew earned their living, and most boats had good catches from time to time.

MOUSEHOLE: The motor boat Edgar arrived on Wednesday evening with between 4,000 and 5,000 mackerel, which made from 11s to 12s per hundred.

The Ben Ma Chree, motor boat, has been fishing with long lines and has been fairly successful, but is now fitting out with herring nets for the Irish herring fishery. [*]

And then the war threw all into the melting pot, with all the younger fishermen being called-up, leaving what fishing there was to the old men, and boys.

About the time of the outset of the 1929 winter herring fishery, off Plymouth, the Edgar was sold to A Tucker, of 1, Howe Street, Plymouth, and her registration in the Penzance Register of Sea-Fishing Boats was cancelled on October 13th 1929. At Plymouth she was given the fishing number PH.202, but, unfortunately, the Plymouth Sea Fishing Boat registers have not survived. However, it is believed to have retained her original name while at Plymouth.

After less than two years on the Plymouth register, in the summer of 1931 there was a report of the Edgar being brought back to Mousehole.

MOUNT’S BAY FISHERY: The majority of crews engaged in the Mount’s Bay drift pilchard fishery are, to date, very little better off than before the season commenced. On the other hand some of the first-class long-liners have secured fair quantities of best kinds, which during recent weeks have realised enhanced prices. Most of these craft will continue working lines in preference to drift gear for the next month or so. Some of the smaller motor boat having been found inadequate for the latter branch of the fishery, owing to the great distance to be traversed to the deep grounds, have been replaced with larger vessels. In the past few days the fleet has been augmented by the arrival of the first-class boat Edgar, recently purchased by Mr. E. Madron at Plymouth, and the even larger Our Katie, which was purchased at Newlyn on Saturday, by Messrs. Rd. and Vivian Johns. [*]

On acquisition by Edwin Madron, the Edgar was re-named Renovelle, and was allocated the fishing number PZ.107, and her story is continued under that name.