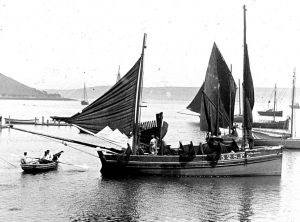 Built at Porthleven in 1893, for Thomas Henry Williams, the Boy Fred was registered as a British Sea Fishing boat at Penzance Custom House on November 8th in that year. She was 38½ feet in length, ten feet shorter than the new class of Mount’s Bay mackerel drivers that were then being built, and measuring . As such was classed as a ‘half-’n-halfer’ by the fishermen. That is to say not quite one thing or the other, smaller than a mackerel driver and larger than a pilchard driver. While unsuitable for taking part in the North Sea herring fishery, or the Irish Sea mackerel or herring fisheries, her intermediate size did permit her to partake of the home spring mackerel fishery, and the summer and autumn pilchard season. The bigger boats being unsuitable for this last fishery.

Marginally under 15 tons by admeasurement, she was registered as a 2nd Class fishing boat and by the convention of the day was given the fishing number 528.PZ.

Occasionally she might have partaken in the Plymouth herring season, about Christmas time.

In the autumn of 1905 she just happened to be in the right place to pick-up some survivors.

On Friday morning the skipper of the fishing lugger Boy Fred, Mr/ T. H. Williams, landed the crew, three in number, of the Newport pilot cutter Water Lily, which vessel had foundered during the night. From a statement made by the skipper it appears that the Water Lily struck a derelict of some sort at 10.30 o’clock on Thursday night, about three miles from the Wolf. The wind was blowing W.N.W., fresh, weather fine, but sea choppy. The cutter began to make water fast, whereupon the captain decided to make for Newlyn Harbour. Notwithstanding vigorous efforts at the pumps, the water continued to rise, and when about three miles from Runnelstone Buoy his craft became unmanageable.

The crew then took to the boat, and at one o’clock on Friday morning the vessel sank when about one mile from the Runnelstone, Longships N.W. by N 1.2 N. A rocket was fired, but as they saw the lights of the fishing fleet, they resolved to pull to the nearest, which happened to be the Boy Fred, of Porthleven. On landing the men were immediately cared for by Mr. W. Bell, chief officer of the coastguard, and a few hours later Mr. R. S. James, local agent for the Shipwrecked Fisherman and Mariners Society, arranged their transit to Newport. The names of the crew are: James Crawford, captain and owner; John Williams, mate; and John Callaghan, seaman. The vessel is partially insured.[*] 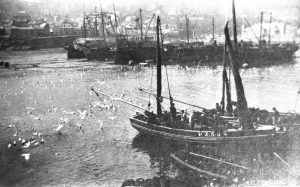 Pictured in Newlyn during a mackerel season, about 1910, the Boy Fred can be seen to have been a conventional ‘half-‘n-halfer.’ Thomas Henry Williams worked her in the local mackerel, herring and pilchard fisheries, as owner skipper until 1914, when he sold her to John Pender of Mousehole, in 1914 .

When acquired by John Pender, the Boy Fred was re-registered at Penzance, and while retaining her fishing number, she was now deemed to be of 19 tons, by measurement, which brought her into the 1st Class of Sea Fishing Boats. She now carried a crew of five, skipper John Pender and four of his four boys.

In the 1970s, my fisherman friend Sidney Pender drew a few rough sketches to show the arrangement of compartments etc, on board the Boy Fred. The first as a sailing lugger when they acquired her, and the second shoring the position of her first engine. 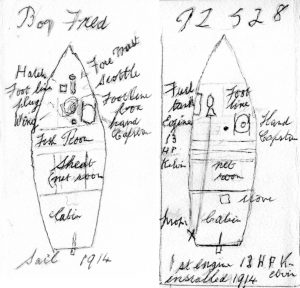 Six months after the Boy Fred was acquired by James Pender, her register was endorsed on August 22nd to indicate that she was now and Auxiliary motor lugger. During the summer a two-cylinder 13 HP., Kelvin engine had been installed. Given that the centre of buoyancy of these luggers tended to be forward, with a swell in the hull providing lift to counter the driving forces under a press of sail, the only place suitable for most of these engines was forward. The Boy Fred was no exception, and mounting the engine here left the fish, and net, rooms unaffected. The engine was mounted on the port side, with a long prop-shaft running aft and out of the port quarter, keeping the propeller clear of the drift-nets, which were worked over the starboard side.

Within days of having her engine installed, just as things looked as though they were coming together for the Pender family, the First World War broke out and ruined John’s plans for the duration. His three elder sons, John James (Jack), Sidney, and Ben, were all RN reservists, and were called up for the duration, leaving him to work the boat through the war with a crew of older men and his two youngest sons – Wilfred and Luther.

During the war, while all of their younger men were away on active service, a large enclosure of pilchards was made off Porthgwarra, which needed the prompt attendance of a large number of carrying-boats to land the fish for the curers – Boy Fred was one of a number of Mousehole boats which responded to the call, and no doubt did quite well by it.

Such a demand has been made for large and small motor boats to convey loads of pilchards from the Penberth and Porthgwarra seines during the past few days that individual craft have made their second and third visit to the scene – and invariably returned either to Newlyn or Mousehole, laden to the gunwale.

The fortunate craft include the Primrose, Lamorna, Our Boys, We’ll Try, Mistletoe, Boy Fred, Smiling Morn, Edgar, and Hopeful, the two last being the heaviest, weighted with some 200 and 220 hogsheads respectively. [*] 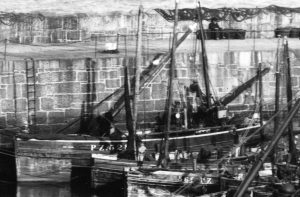 After the war – before she was given a wheel-house – she was photographed alongside the New Quay at Mousehole.

In time her original engine was found to be inadequate, or inefficient, especially for slow speed work when shooting and hauling lines, so, when funds permitted, a second, single cylinder, 7 HP., auxiliary unit was added during the 14-18 war. Space restrictions meant that this engine had to be mounted to starboard, with her propeller shaft running an oblique angle, out of her port quarter. This did the job, but she took a lot of helm to hold her course when using this engine. It’s not clear in the register, when this additional engine was installed, but Sidney told me it was done during the war. They also unshipped the old hand-wound capstan, and ceased to attach foot-lines to their mackerel and herring nets, using the small engine to drive the boat up the nets when hauling, against hauling the foot-line by the capstan.

Shortly after the end of the war, the Boy Fred was fitted with a wheel house – as were most of the Mount’s Bay boats of her size and class about that time. About the same time, during the summer of 1922, the old single cylinder auxiliary engine was replaced by 4 cylinder, 26 HP. Kelvin. Following these changes the boat was again re-measured, and on July 13th 1922, her register was endorsed to the effect that she now measured just 14.32 tons, which brought her back into the 2nd Class range.  At the same time her ‘Mode of Fishing,’ was amended with “& Lines,” added to the existing “Nets.”

Sydney made two more sketches of the Boy Fred to show the progressive arrangement of her machinery. 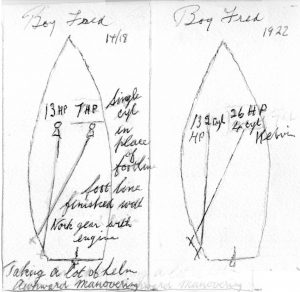 While she ostensible carried a five man crew, she frequently carried a few more, and in the above photograph seven can be seen on deck, and there would have been one in the wheel-house. It’s possible this photo was taken when she was running her engine trials in 1922.

Although the Boy Fred was principally employed as a long-liner, she did make occasional landings of pilchards at Newlyn. In practice she would occasionally work a few pilchard drift-nets to catch bait for her long-lines. On those occasions when she caught more than needed for bait the Pender’s would sell the surplus on the market.

As indicated at the foot of the above table, during the last five years of being worked by the Pender’s she landed no pilchards at Newlyn.

Father John Pender died in 1922, and the boat was registered in the ownership of his widow Sarah Anne Pender, when her eldest son John James Pender, was endorsed as skipper. 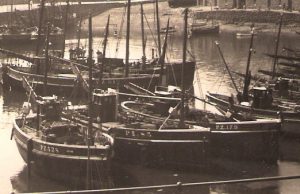 Boy Fred~PZ.528, moored alongside Girl Stella~PZ.83, and Golden Sunset~PZ.178, with the larger Children’s Friend~PZ.619, astern of them, in Mousehole c.1930. (John McWilliams collection)

Shortly before the Pender’s disposed of her, she was photographed at her moorings in Mousehole harbour, The space below decks taken up by the two engines, fuel tanks etc., meant that she was cramped for space below, and rather small over-all for long-lining. So it was decided to replace her with a larger motor fishing boat, to be built for them over at Porthleven.

The Pender’s new boat was the Lyonesse~PZ.81, which was registered at Penzance on September 29th 1930. They held on to the Boy Fred for a short while, as a back-up if the new boat proved too costly to run, but long-lining proved so successful, that the Boy Fred was sold in December 1931. Sold to Joseph Pollard Harvey, he had her re-named the Israel Britain, while retaining her original fishing number.

As the Israel Britain she worked almost anonymously out of Newlyn for the best part of the next ten years, and was employed mainly in the pilchard drift fishery up until its financial collapse in 1938-9, when rampant Italian inflation ruined the trade. While she was never top boat, the Newlyn Harbour records of her landings show that during this period she made above average catches and earnings.

She was mentioned in passing in the spring of 1937, when one of her crew was injured in an accident on shore. The crew were engaged in removing a set of the boat’s fishing nets from a store in Boase-street to the Great Grimsby Stores barking tanks, for creosoting –

‘when the handcart on which the nets were placed, and the shafts of which were held by Mr. Beckerleg, slipped throwing Mr. Beckerleg on the ground, at the same time crushing his fingers of both hands. Mr. Beckerleg’s fingers were very badly injured, and caused much loss of blood. Medical aid was immediately summoned after Mr. Beckerleg had received prompt attention at the local nurses’ hut.’ [*]

However, by then she had passed the ownership of Sarah Wearne, of Boase-street, (daughter – on April 22nd, 1936), with Joseph Pollard Harvey [junior?], as her skipper.

Then war broke out and once again the reservist-fishermen were called to the colours, a call which included Joseph Pollard Harvey, junior – who was promoted to Lieutenant RNVR before the end of hostilities – and the Israel Britain was left without her regular crew.

By the spring on 1942 the boat had reached the end of her economic life, and on March 12th her register was endorsed “Boat unfit for further service, to be broken up,” and her registration was cancelled.