Built in 1878, the Mount’s Bay lugger Percy, was part of a significant expansion in the numbers of ‘Bay’ based fishing boats, encouraged by the increasing success of the great western mackerel fishery. Twenty years on from the linking of Cornwall with England by rail, the fish trade was booming – particularly the drift fishery for mackerel.

We don’t know which of the local boat-builders built the Percy, but she was built for George Laity,[*] and William Pezzack, two established Mousehole fisherman. George would then have been about 30 years of age, and William would have been about 59. George Laity was a lodger in William Pezzack’s home on Census night 1871, and married William’s daughter Mary Ellen Pezzack later that year. Tragically Mary Ellen Laity died in April 1876, when only 24 years of age.  George Laity later remarried, but William and George were ‘related’ when their new lugger was built.

The Percy was a fine mackerel-driver, a fully decked boat, 44 feet long on the keel, a little under 47 feet over-all, measuring 14 tons, with basic cabin accommodation for the seven crew. Like a good many fishing boats of her type and size, the regulations deemed that fishing boats of under 15 tons measurement, were 2nd  Class boats, and her class was indicated by her Penzance fishing number appearing as 30.PZ, at this time. She was registered at the Penzance Custom House, on February 13th 1878, in the joint ownership of Geo. Laity & Wm. Pezzack, and had been completed just in time for the boat to engage in that seasons Mount’s Bay mackerel fishery. Typically she was worked by a crew of six men and a boy, including skipper George Laity.

We don’t know the names of all her crew serving under George Laity, but 29 year old William John Williams, of Mousehole, served in the Percy during her first year of fishing. He tragically lost his life just two years later, when the lugger Jane was overwhelmed off Penzance pier head. It just happened that William had kept a record of his earnings as a fisherman in a notebook, which he fatefully left at home on his fatal last voyage. By this we find that the Percy, fished for mackerel in Mount’s Bay, and off the Cornish coast between March and June, during which time he and his nets earned £25 15s. The boat then went over to Irish waters where they fished for herring between June and September, when he earned another £19 16s. 8d. But then they made a short and expensive trip up to Aberdeen for herring. Here they only fished during the last week in September 1878, when William only made 19s 5d. The following year he went fishing in the Jane, but that’s another story. 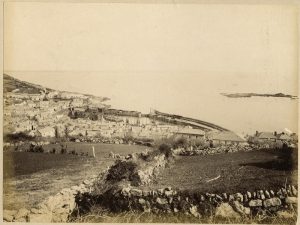 Mousehole harbour from the fields above, c, 1880. It looks like fine weather, but the ‘baulks’ are down closing the harbour mouth.

The same morning as the Jane was lost, the Percy was also trying to enter Penzance harbour for shelter. It should be born in mind that at this time the ‘baulks’ closing Mousehole harbour were put down in bad weather, and that the grand harbour at Newlyn was still a pipe-dream.

A week after the loss of the Jane, an account of George Laity’s experiences on board the Percy that night was published.

All the talk has, of course, been of the storm. Old men of four score declare they have never seen heavier seas, break on shore, and cannot recollect anything like so must damage being done in one day’s tides. The storm so destructive in its results was quite phenomenal in its occurrence. George Laity, of the Percy, drove for mackerel off the eastern land. They hove in the net pretty early and went in under St. Michael’s Mount to stay till day-light. All but the watch turned in. Very early in the morning the watch rouses the rest and reported a tremendous sea coming in from the west-ward although there was no wind to speak of. So heavy was the sea that they could not haul the anchor, and slipping it they ran for Penzance harbour. When off the Rhymon [Ryemen] they had a very narrow escape. Three heavy seas struck the boat in rapid succession, and Capt. Laity thought she was gone. Three attempts were made to enter the harbour, but the Percy was compelled in consequence of the tremendous sea to haul off the pier and go about again. About six o’clock, however, she got through the surf fairly well. The difficulties of the crew were greatly increased by not being able to make out the pier-head light, the seas obscuring it, but they were guided by the town lights along the Albert pier. The night’s risk was worth a score of mackerel only.[*]

Giving them a haul of just 21 fish according to the Cornishman’s otherwise very similar account of this incident.

Part owner William Pezzack (82), died on December 8th, 1882, but it was not until July 8th, 1891, that George Laity recorded his sole ownership of the lugger. He continued as her skipper, encountering some heavy weather during the 1884 mackerel season.

MOUSEHOLE: BOATS IN PERIL. – In the storm off Scilly last week the Larkspur, T. Richards, master, a very heavy sea fell onto her, washing the punt about the deck. One of the crew on landing was confined to his bed for two or three days. The Percy, George Laity, master, whilst running before the gale, threw oil over the stern to prevent the broken water coming aboard. They used all the oil they had.[*]

Meanwhile, widower George Laity had married Jane Pentreath in November 4th, 1882, but the incidence of infant mortality was high in this period, and on February 26th, 1885, their three month old daughter, Mary Ellen, died.

Following new tonnage measurement regulations, the Percy was re-measured in October 1889, when she was deemed to be of 19.94 tons, which took her into the 1st Class fishing boat range, and her fishing number was then re-presented as PZ.30. 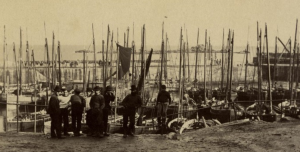 During the summer of 1890 Mousehole held their second regatta and harbour sports. The lugger Percy did not compete, but after the two main races for the first and second class luggers, there were a number of supporting events including one for two-oared punts. Working fishing-boats’ punts that is.  In this George Laity’s son Percy – then about 16 – strained at an oar, but to no avail:

TWO-OARED RACE. Robert Matthews and Phillip Matthews decidedly earned their 7s 6d, and John Pender and Richard Rowe, in taking 5s had all they could do to prevent it being the property of Percy Laity and John Harvey.

There was to be another two-oared race, but it fell through.[*]

After the close of the 1891 mackerel season, George Laity relinquished command of the Percy, appointing Richard Reseigh in his place. Of Richard’s time in command we have no reports of the lugger, and a couple of years later Edwin Harvey became skipper. While Edwin was skipper, only one report about the Percy has come to light.

MOUSEHOLE boats fishing off Plymouth, have fallen in with such heavy shots of fish that in some cases they lost fish and nets. The Percy, of Mousehole, only managed to save three out of her fleet, which means a great loss to owner and crew. Primrose had a good Haul without much damage to nets, but the fish were sold for £4 per last (10,000).[*]

Around the turn of the century, as well as owning the luggers Edwin, and Percy, George Laity also owned mackerel seines at Mousehole, and there are occasional reports of their success. These seine nets were much smaller in overall size than the pilchard seines, as the mackerel tended to school in smaller bunches of fish, in in-shore waters, these nets were easier to work from small boats.

MOUSEHOLE: GEORGE LAITY has made some good captures of seine fish during the week. At one enclosure he secured twelve thousand mackerel . The fish were small but sold at from 4s. to 6s. per 120.

A GOOD HAUL of seine mackerel was made on Monday morning by the Mousehole seiners. On Sunday evening several shoals of mackerel were seen between the Island and the shore, consequently the seiners were astir on Monday morning. Laity’s seine was the most fortunate, securing between eleven and twelve thousand. The fish were taken to Newlyn, where they realised about 5s. per hundred. Three other seines were on the lookout but were not fortunate in enclosing so much fish. [*]

In May 1906, aging George Laity (58), gave up his interest in the Percy, making her now the sole property of his eldest son, Harry Percy Laity (31), after whom the boat had been named.  Percy had married Susan Mary Trewavas, the previous year, and the transfer of ownership to Percy, marked a material change in the family’s boat ownership.

The Percy’s registration as a fishing boat was cancelled on February 9th, 1907, and she was broken up. Just the previous year, father George and Percy had acquired the bigger lugger Annie Jane~PZ.614, second hand at Newlyn, apparently under very good terms. Barely a week after the demise of their former Percy, on February 15th 1907, the Annie Jane was re-named Percy – but that’s another story in this series.