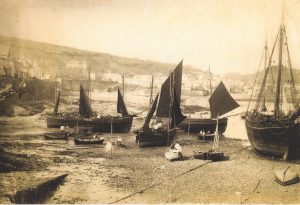 A fleet of luggers and ketch at low tide inside the Old Quay, Newlyn in the mid 1870s

The surviving Cornish Shipping Registers and Sea Fishing Boat Registers held by Cornwall Record Office, together with associated Crew Agreements, are held in class MSR – Merchant Shipping Registers. Those for Penzance are sub-classed PENZ. In all there are 14 registers which the record office numbered as they accessioned them, and including the registers of ‘shipping’ and ‘fishing boats’ in one sequence.

However, here I am only considering the Penzance Sea Fishing Boat Registers – the first of these now being listed as. –

CRO/MSR/PENZ/ 5; – Originally Sea Fishing Boat Register No.1 when held in Penzance Custom House. This register is indexed and commenced on February 25th, 1869, with the registration of the first class lugger Fling ~ PZ.1. It comprises 249, double page openings (numbered in manuscript), but the last entry appears on page 209. Each page opening has a row of headings to columns asking for the following information. –

On the left hand page:
Date of Registry
Name of Vessel
Port or Place to which belonging
Name of Owner
Name of Master

Initially the registrar recorded six boats to a page, though sometimes there were only five, and occasionally only four – depending on the nature of the entry. There was plenty of scope for idiosyncratic entries by each registrar. At Penzance [but not at St. Ives] the registrar initially kept three consecutive number lists, one for each class of fishing boats – so we have a PZ.1~Fling (1st Class); 1.PZ~Weatherall (2nd Class); and a PZ.1~Sarah (3rd Class). And this confusing concurrency continued up until the September 1869, with the registration of the William-PZ.45 (1st Class), and the Union~PZ.45 (3rd Class). Thereafter only one boat at a time carried a particular number, though many numbers were re-used after they have been made ‘spare’ for some time following cancellations.

As another instance of the registrar interpreting the rules in his own way. Normally each individual boat was allocated a distinctive number. However, in the case of a number of boats being owned by a seining company he, occasionally, gave them all the same number – eg. PZ.28, on folio 86, records eight boats for the Penberth seine Friendship – such entries take up two or more spaces. Between folios 99 – 177, the registrar recorded only two registrations per folio, but from 178 to 209 he records three per folio. The final entry in this register is for 216.PZ~Richard & Ann, on April 14th 1881. There were also dates of endorsements [annual], of active fishing boats currently registered, and these run up to 1879-80.

On 10/9/1871, following the registration of Catherine~29.PZ of 26th July 1871, the register is endorsed – “No more numbers to be issued until cancelled numbers are appropriated.”

A number of registrations of the smallest 3rd Class boats were cancelled in 1878 under ‘Regulation 1a of Sched: see fo.112/1877,’ and became exempt from registration.

CRO/MSR/PENZ/6. – Is marked ‘3’ in ink on the front cover, but this may not be an original inscription. Indexed, and comprising 248 double folios, these are in the same printed format as the preceding register. However, this register has been divided into alphabetical blocks of folios –

Each alphabetical block commenced as a transfer register, re-entering earlier boats having a current certificate of registry (from the first register) – but there is no cross-referencing back to the previous registrations. Subsequently new registrations and re-registrations are interspersed, making it difficult to identify new from old. In many instances blank folios were left at the end of each alpha block, but some later registrations have been retrospectively inserted in previously blank spaces. However, once several of these alpha blocks were filled the registrar started a completely new register. The final alpha entry in this register is for 507.PZ~Wild Rose on 14th December 1892, on page 203. However, on page 205, are entries for four boats made in 1894 & 1895 – Belle, Iverna, Florence Edith, and Gertrude. These entries are endorsed ‘Transferred to New Register 9/3/95.’ The boats entered in this register carry certificate endorsement dates from 1881-92. On 16th August 1884 a number of owners were ‘Cautioned’ by letter for not having their sails marked with the port letters and number.

CRO/MSR/PENZ/7. – Perversely this register was originally marked ‘1’ on the front cover, ignoring the fact that there had been two previous registers. It follows the same form of double page folio entries, with the same pre-printed column headings. In this case there was no attempt to create alphabetical blocks, and the registrar adopted a rule of allowing space to register just two boats per page opening, although frequently there is only one entry. This allowed ample space for future endorsements. Again the page openings are numbered in manuscript, and there are 277 page openings in this register. It opens with the undated transfer of PZ.1~Weatherall, sometime in 1892/3 – this boat now being deemed a 1st Class boat by new measurement regulations. This is confirmed by the endorsement ‘Transfer from old book completed 5th March 1893,’ inside the front cover, and there are several endorsements in red ink indicating that the register had been inspected by the appropriate Officer. As in the previous two registers there is no place to distinguish new built boats from re-registers, nor yet where or when they were built. However, the first new registration appears to be for the Amazon~PZ.517, on March 27th 1893.

This register was notionally full when it was closed, though there are unexplained blanks. It closed for new entries with the registration of 554.PZ~Gleaner on 28th September 1894. Unfortunately this register does not carry any record of the annual presentation and endorsement of current fishing certificates, but the final new entry appears to be for the Volney~86.PZ, on April 23rd, 1902. Even so, it appears to have remained a current document for many years, and the final endorsement was made on December 23rd, 1915, when an engine was installed in the Porthleven lugger Naomi~192.PZ.

CRO/MSR/PENZ/8. – Marked on the cover as ‘2,’ this appears to be a register of new boats, or first registrations. It is in the same format as the four preceding registers, and is about the same size. However only 50 pages have been numbered and these 50 are the only ones carrying entries – normally two entries per page. These commence with 555.PZ~Belle on October 4th 1894, and close with PZ.45~Morning Star on 4th August 1900.

One of the Government’s purposes behind the registration of fishing boats, was to have a notional record of the number of seamen the Navy could draw on in the even if hostilities. To achieve this each tear every port registrar had to submit a return of current data relating to fishing and the fisheries in his port. Pasted inside the front cover is a letter from the Registrar General dated December 1889, instructing the Superintendent at Penzance to commence using the ‘new and simpler Form of G.R.202a from First January next.’ This was the form of return.

I enclose a new and simpler Form of G.R.202a to be brought into use from the First of January next, and a Summary G.R.20.. to be used for the year 1889 and subsequently in lieu of the Manuscript Summaries and the “Appropriate” [?]  Return

The Annual Return of Fishing Boats can be used to serve two purposes:

It is important that the Return should include all the Boats on the Register on the 31st December in each year, in order that your register may be checked against the one kept here

In addition therefore to G.R. 20… (which you will observe is to include Boats for which new or duplicate certificates have been issued as well as these above certificates have been endorsed) you are required [?] to furnish, as last year, a separate G.R..202c (a supply enclosed), showing those Boats on the Register at the end of the year whose Certificates have not, but should have been, entered during the year; and I shall be glad if you will supply me with any information you may be able to obtain respecting them.

If the Certificate of any Boat was endorsed between the end of the year and date of sending in the Return the Boat should be included in G.R.202a.

It is important that information should be given, as far as you have been able to obtain it when entering a certificate or issuing a new or duplicate one, as to the employment or un-employment of the Boats.

In the case of any Boat, if the owner states that he proposes to employ it during the year in fishing, it should be returned as employed.

All Boats whose Certificates have been cancelled during the year should be omitted from these returns, and any entered on G.R.202s prior to date of cancellation should be struck out.

Clearly there were duplicate registers kept at head office, and every new registration, endorsement, or cancellation had to be advised to head office on the appropriate form. However, these registers do not seem to have survived.

CRO/MSR/PENZ/9. – Originally Sea Fishing Boat Register No.3 at Penzance, this is a full register comprising 300 double folio pages [600 registrations], with two boats per folio, on the left and right hand pages. This register commences in 1909/10, with the transfer of currently registered boats from Registers 1 & 2. It includes new registrations from 1909, from folio 235 onwards. The last new registration is that of the Winifred~PZ.76, registered on 24th July 1914. Although there were no spare folios for new registrations, the register remained ‘open’ until the remaining currently registered boats were transferred to Register 5 [CRO/MSR/PENZ/11], or Register 6 [CRO/MSR/PENZ/12] c.1932. This register covered the transitional period when local craft progressed from sailing luggers to auxiliary luggers, to motor fishing boats, with a few trial steamers in between. It records the annual endorsement of Fishing Certificates from 1910 to 1931. During its currency it appears that some of the ‘Creeks’ such as Sennen Cove, were given special treatment, with the local Registrar making occasional visits for the purpose of up-dating the register and making endorsements, rather than insisting that the fishermen came in to the Custom House at Penzance. There are also a large number of boats ostensibly registered for the first time that were built many years previously. In the case of most of the smaller boats this is probably correct, but for the larger boats there were probably previous registrations which were not noted.

CRO/MSR/PENZ/10. – Penzance Sea Fishing Boat Register No.4, is a composite register in the same format as the previous register. It appears to have been commenced as part of wartime regulations in 1915. It lists – new vessels from November 1914; transfers from Registers 1 & 2 from January 1915; and the first registrations of small rowing boats as an emergency control measure. Many of the latter were cancelled shortly after the war ended as not required. It records the annual endorsement of Fishing Certificates from 1915 to 1944, when currently registered boats were transferred to Register 6 [CRO/MSR/PENZ/12]

CRO/MSR/PENZ/11. – Penzance Sea Fishing Boat Register No.5, is a small transfer register comprising 48 double folio pages: in the same format as before with two vessels per folio. It commences with a general re-registration of existing boats c.1931 – being the date from which their Fishing Certificates were subsequently presented for endorsement, with 1944 as the final year of these presentations. Most of these re-registrations bear a former registration date – see MSR/PENZ/9; or /10. There are only a few new registrations towards the end of this register.

CRO/MSR/PENZ/12. – Penzance Sea Fishing Boat Register No.6, is a general register comprising 145 double folio pages as per the previous register. Details of 290 boats are recorded, commencing with a re-registration of working boats on the current register c.1944 – being the date from which their Fishing Certificates are first endorsed. New registrations do not commence until that of the Cormorant~PZ.43, on May 4th 1945 [folio 113]. This register closes with the registration of the Anthony Stevenson~PZ.331 on 16th November, 1948.

As I mentioned in the beginning, this has been a lifetime obsession, of work in progress – so. –

CRO/MSR/PENZ/13. – Penzance Sea Fishing Boat Register 1949-89 – has only been partially transcribed by me – and the CRO is currently closed during removal to new premises].

But – work in progress!